I recently published an entry describing Raleigh’s integration in the household. I may be harping on Peachy’s adjustments to life at the cosy apartment a bit too much, but the progress this very timid fellow has made makes me feel very good. With me, he has made strides, especially recently, allowing me to walk past him and even up to him without scurrying away. I can pick him up, without a struggle on his part (not without reluctance, however); I hold him very briefly, give him a kiss on the top of his fuzzy head, then put him down. I think this demonstrates to him that being picked up doesn’t always lead to horrific consequences, such as clipped nails or eye-drops. And I have shown pictures of him on the bed with Josie and Renn; those two, and especially my Chubs, are pretty easy on new cats. 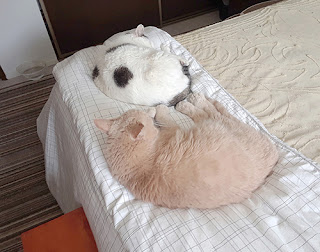 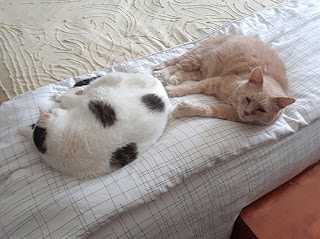 But what made me feel especially good was Tucker deciding to come up onto the bed when Raleigh was already there. I was at the computer next the bed yesterday evening when I saw Tucker amble hesitantly into the bedroom. He knew that the Peach was already in place and spent about five minutes determining his course of action. Eventually, despite my urgings, the roly poly turned and walked out. But not two minutes later, he surprised me by climbing up the short staircase at the bed’s foot and lying down. True, he was wary, and seemed not really to relax, but he made the effort and took the chance. Raleigh didn’t move; I imagine he was too comfortable. Both cats remained on the bed for about twenty minutes. 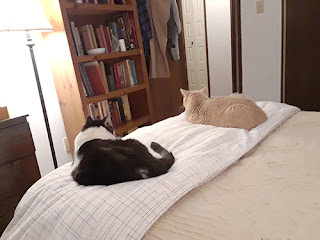 Seeing a cat learn to trust is heart-warming. It isn’t rescue’s purpose, since rescuing animals is not about how they interact with humans, but about how to better their lives. This may involve socialisation, it may not. But when it does, such progress is a visible reward for efforts which sometimes don’t receive any recognition from the animals themselves and, indeed, should not require any. Even so, when someone like Raleigh accepts his roommates, both human and feline, he is, in a way, saying “thank you”. And that is always nice to hear. 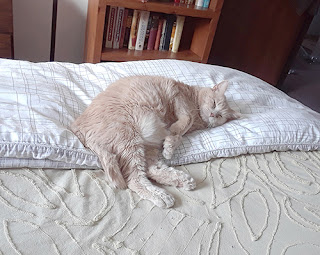