Neville is becoming more and more comfortable with living in the cosy apartment. He has begun using the litter-boxes in the store-room, the ones the other beasts use, and not just the box in the library, which was his sole box during his brief confinement in that room. To me, this suggests that he is starting to think of himself as acceptable by and accepting of the others.

The Thin Man also has been exploring his small world more, not restricting himself to the top of the tall cat-tree in the sitting room. I find him sometimes relaxing on the couch; he will now and then eat his dinner on the shorter cat-tree, and he has been up on a dining room chair. As well, he has jumped on to the bed at bed-time twice. He seems a bit bewildered as to what should happen next, and even rather disappointed that all that follows is sleep. He has on both occasions soon jumped down again. But the important thing is that he leaped up in the first place. 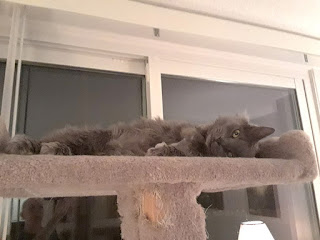 Neville is comfortable around the other cats. I attribute this to their almost complete apathy toward him. I think he enjoys that. At his previous foster-home, he was one of many cats, too, but several annoyed him, without meaning to; one, in particular, an eager little kitten, thought of Neville as a playmate, or perhaps a play-thing, which led to stress on Nevsky’s part and, in turn, bad blood-sugar numbers. Now, he wanders about, briefly stared at by some, and verbally savaged by Cammie if he is in her way, but otherwise unnoticed. I believe that this has permitted not only a remission in his diabetes, but an ironic kind of welcome. A cat who isn’t definitely rejected by a group soon finds his own place in it.

He is also warming to me. He enjoys play-time, and especially meal-times. I pet him as often as possible and, when I do, have noticed that his purring starts sooner. He doesn’t like being held, and may never do, but merely twists and turns in my grasp; he doesn’t scratch or bite. Neville is a cat of moderate patience. I can cut his claws, though he begins to end the procedure after one paw is done; even so, I can do both forefeet without much trouble.

As Neville and I grow more acquainted, and accustomed to each other, I will learn more about him, and his trust in me will increase. So far, his integration into life at the cosy apartment has been good, from my point of view; I hope it is from his, too. 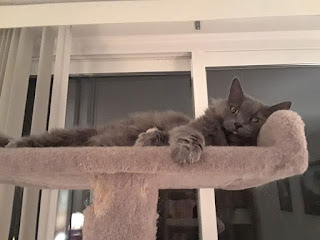