There is a cold making the rounds among the feline residents of the cosy apartment. Renn had it first, though, as is his way when he has a cold, it manifested itself principally through explosive sneezes, a few sniffles and nothing else. My big boy wasn’t slowed down and his appetite, such as it ever is, was unaffected.

Next struck was Josie. My Chubs had plenty of sneezes, firing little bursts out of one side of her mouth and screwing her face shut like Popeye. Considering her age and growing frailty, I was afraid for her, but my old lady seems to have overcome the worst of it with no lasting effects.

Tucker is the real victim of the cold. He has been hit hard, having contracted it a couple days ago. His sneezing is messy and I can hear him wheezing a little. I worry about the cold developing into an upper respiratory infection, though, if it is coming, it won’t show up for a few days yet. Tucker had a decent meal at snack-time last night, for which I was grateful. This morning he ate little, but the roly poly one isn’t a breakfast kind of guy. 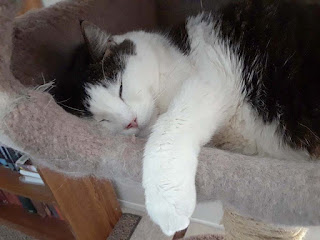 He is also suffering from an abrasion on his nose. This was a simple scratch before his cold, probably received in a disagreement with Renn. The brothers have spats now and then; Tucker usually starts it, and usually gets the worst of it. Since then, however, he has been rubbing his leaky nose, and irritating the scrape. I will keep an eye on that, too. 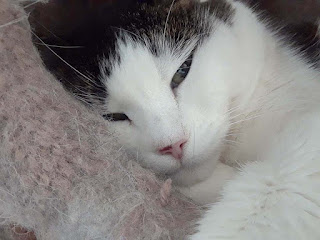