Josie is hard of hearing. She is not deaf, though she may be considered partially so. She can certainly still hear, but I often must speak loudly to her, or be close to her, for her to know that I am speaking.

The most obvious signs of Josie’s growing impairment come when I walk into a room where she is lying. She will start or jump a little upon seeing me, as I materialise silently near her. I always try to let her know visually that I have arrived, but trying to get her attention with a movement also startles her. My Chubs will catch me out of the corner of her eye and her head will whip around, surprised by my presence. Speaking loudly startles her, so I sometimes make a noise that increases in volume. This, however, will wake her unnecessarily if she is snoozing. I usually try to allow her to sleep through my presence; if she does not, though, she experiences the same start that comes from seeing me suddenly. Living with a partially deaf animal can result in dilemmas.

I wonder what she thinks of all this. Being a cat, I am sure that she takes it in her stride. Just as I imagine that Cammie was frustrated by her abrupt blindness but quickly accepted it, Josie probably just accepts the diminishing sounds in her world. But I chuckle over the possibility that she fumes, like a human, that people are always mumbling these days; why can’t they speak up?

In her old age, she has become, as I have mentioned previously, much more demonstrably affectionate. Is this due to her growing disabilities, her decreasing sharpness of hearing, her slowing movements? Is she less secure than she used to be? As she accumulates years, I will show her that she is safe and loved. I just may not be able to tell her so. 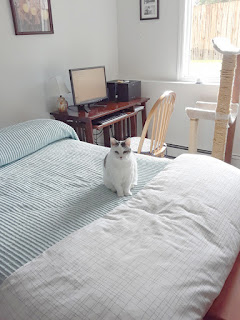