One Down, One Up

Earlier this week, I wrote about Neville’s diabetic treatment, and how his insulin dosage has been reduced with, apparently, good results. Today, I must report that Tucker’s dosage is being increased.

This, however, does not worry me a great deal. His dosage has been two units in the mornings and one in the evenings; the latter is now being increased to match the former. It isn’t a great jump and will, I think, be beneficial.

Unlike Neville and my late friend Parker, Tucker’s diabetes has always been rather erratic. One ‘curve’ will display an excellent set of numbers, from moderately high down to just right; the next will show him nowhere near what he should have. There is a danger, of course, in adjusting the dosage too often, just to match fluctuating numbers. But the roly poly one has been on his current amounts for some time, enough to demonstrate that, while they are adequate, he can do better.

In another week or two, I will perform a ‘curve’ on my long-suffering sausage-like beast, and see how he is doing inside. Until then, he will play a little, eat very little, purr a lot: in other words, he will continue being Tucker. 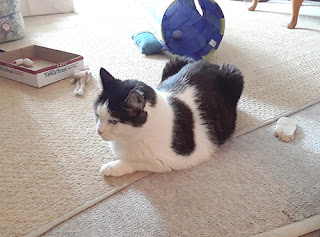