To Catch a Sunrise

I trapped Sunrise this morning.

This handsome, sad-faced orange boy succumbed to Temptations, literally. Previously, I had seen that he had been interested in the sardines with which I had baited the traps, but not interested enough to enter the cages. He may have had some experience of them, if only seeing them in action from afar. Then I recalled what had lured Ambrose, the lost housecat I had recovered, into a trap at last. It had been some candy, in the form of Temptation treats.

Yesterday, with three ferals still to catch at my work-place, I used both Temptations and sardines as bait. The former was placed in the middle of the trap, intended to bring a cat farther in and so trigger the trap. Sunrise, who had been nosing about, went in at some point, ate the treats and left the sardines. Clearly, he was wary of the cage, and not sufficiently enticed by the sardines. Today, I used only the treats. They are small enough so that I was able to place them on a piece of stiff paper actually under the hard mesh ramp that acts as a trigger for the trap’s door. Sunrise could not resist. 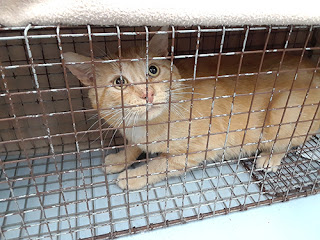 I hope to have Sunrise neutered today. It’s possible that he is already fixed; I have never been able to take a good look, though my colleague at work, who feeds the feral colony, says that Sunrise is ready for his surgery. I credit my co-worker with bringing Sunrise to the point at which the orange fellow comes more often for food, and for allowing him to grow accustomed to people. Sunrise doesn’t run when the food is being doled out; indeed, he waits near by. This permitted me to re-orient a trap even as Sunrise was watching me, then to retreat and watch the proceedings.

In the trap, Sunrise did not panic. I wonder if he is only feral by situation, and not behaviour. My thoughts in this regard may be influenced by Sunrise reminding me of Raleigh. He has the same melancholy expression. Part of me regrets having to trap adult feral cats, especially those who have grown to trust, to an extent, the humans who care for them. Capturing kittens or youngsters doesn’t weigh on me as much, for they have not developed any trust. Sunrise is different. But I am hopeful that, like Bijou, Haff and the others who have previously been captured, fixed and returned, Sunrise will see that all ends well. He deserves at least that. 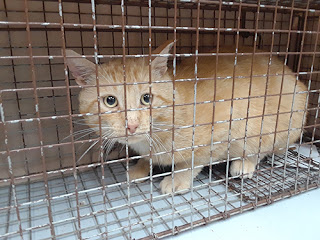