Three weeks ago, I decided to lower Neville’s insulin dosage. He had been receiving three units twice a day (once in the morning and again in the evening.) Two ‘curves’ (examinations of his blood-sugar numbers over a day) had taught me that his numbers were going too low. The first curve was low but satisfactory; the second was too low, period.

Consequently, I lowered his dosage to two units twice a day. I have not yet performed another ‘curve’ on the Nevsky. They are very hard on him. He hates the ear-pricks for blood; he has not Tucker’s resignation in that regard. But on Sunday I took blood before both his insulin injections, and at the time of day when his numbers’ nadir would likely be reached.

Whereas previously, his nadir dipped to 3.5 (the best range for blood-sugar is between four and eight), it was now 8.5. This is probably average for his new dosage, and is much better. (In terms of blood-sugar, if it can’t be in the perfect range, it’s preferable to be higher than lower.) I will perform a full ‘curve’ on Nev in a few weeks; the interval will allow his body to adjust more to the new dosage, and thus give a better picture of his numbers.

Diabetes is a confounding condition, and affects many of those who have it differently. For instance, Neville’s ‘curves’ are rather drastic, compared to Tucker’s, starting very high and dropping low, then climbing again suddenly. Tucker’s ascension as his blood-sugar builds again (recovering from his insulin injection) is gradual; Nev’s will rise from readings of nine or ten to twenty or more in a couple of hours. This may seem alarming, but it appears to be a safe pattern with him. It’s where clinical signs help determine the treatment’s success. Neville is doing well, I think. 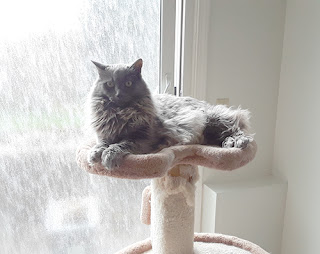