When Cammie lost her sight, I tried to make living as easy and convenient for her as possible. Among my actions were to place a small bowl, a cup, really, on a shelf of my desk close to the floor in a corner of the bedroom, near Cammie’s heated cat-bed. After numerously directing her attention to it, by tapping the bowl and stating ‘water’, she soon found it – probably through smell, and not my efforts. She resorted to it all the time; it was just a step or two from her favourite napping spot. 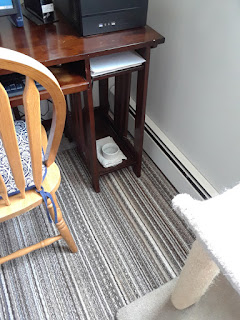 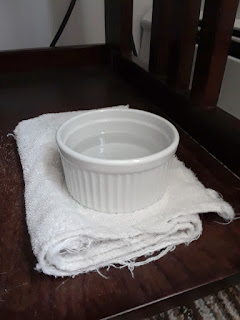 When Cammie died, I removed the bowl. There were six others in the apartment, two in the bedroom alone. No one was suffering from water-deprivation.

But when I started to notice Josie’s slower movements and considered the possibility of arthritis or other discomfort affecting her joints, I decided to replace the little bowl. To my satisfaction, my Chubs has begun to drink from it, quite as often as she does from the bowl placed on the ledge below the window above, or the large one by the door. If the Great White is taking her ease on the floor, or a lower platform of a cat-tree, it is a much easier route to a drink than having to climb for one. Renn, too, likes the bowl, from which he had now and then surreptitiously drunk when Cammie was alive. 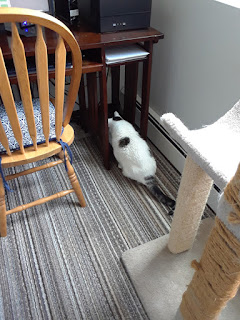 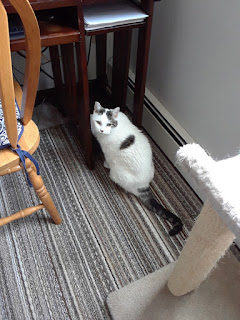 Now, Cammie’s cup comes close to running dry each day, and is actually drained of water, if I am not on top of things. Renn drinks infrequently but deeply, while Josie finds herself thirsty several times a day. I am pleased that they are using the cup, though I doubt that my princess would be as delighted. I can hear her hiss and growl, bumping into the interlopers daring to drink from her little well. After all, it is Cammie’s cup but, perhaps, she will forgive me for loaning it to her siblings.
Posted by John Bellen at 1:58 PM