My luck has held, and the last of the kittens from my work-place’s feral colony has been captured. This is Phineas. 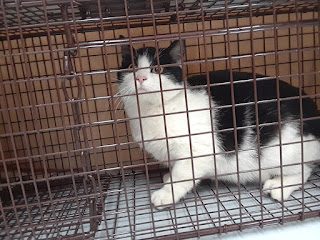 As you may remember, a concern was trapping Rhombus again, and thinking he was Phineas, as the pair, undoubtedly brothers, resemble each other closely. But I had two others here at my work-place confirm that I had someone different. In the picture of Rhombus, below, you will note the narrow black patch under his chin, like the tiny beard that used to termed a ‘thumb-piece’. As well, the white patch above the bridge of his nose is wide. Phineas has the narrower patch of white and a completely white chin. By the end of today, all five youngsters will have been fixed. 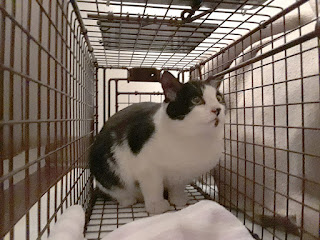 But the story doesn’t end here. An individual has come forward to take in four of the kittens and socialize them, so that they will stand a chance of being adopted. Medallion, whose progress has been such that she acquiesces to being petted - warily, but without strong signs of fear - will stay in her current foster-home. This new situation developed only after Rebus, Rhombus and Philo were released; this couldn’t be helped. Now, then, Operation Doctor Moreau is replaced by Operation Déjà Vu. I have three more kittens to trap - again. 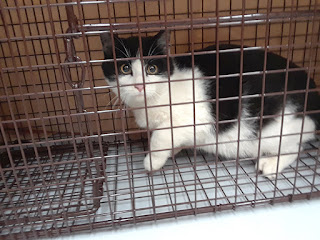