My new foster-cat, Neville, is doing well. I will be checking his blood-sugar every fortnight; I had been reading it every week, but with consistently good numbers, I have decided to reduce the exams, which he heartily dislikes, to every two weeks. He has not received insulin in nearly a month.

He is also no longer confined to the library at night. This was the next step in his integration, as I would be able to wake and confront any situation that might result. There has, however, been no untoward incidents with the other cats. Indeed, I think he spends almost the whole night at the top of the highest cat-tree. There, he is safe from the other beasts – who are mainly apathetic about his presence, anyway – and from which he can view the outside through the room’s glass doors. He nonetheless climbs down to use the litter-box (he still uses the one in the library), regardless of the time. 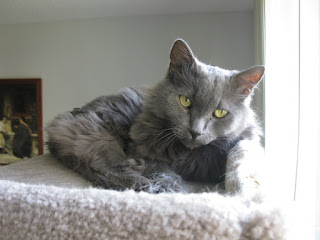 The Thin Man is eating well, and he is, to judge from how his body feels, not as thin as he once was. I am concerned that he likes only one type of soft-food. Despite attempts to interest him in others, he restricts himself to a single variety. He also consumes hard-food, but with cats notorious for suddenly and – from a human’s point of view – unreasonably deciding no longer to like their favourite kind of nutrition, I like to have others ready.

But Nevsky’s biggest characteristic in regard to food is his laziness. He is a lazy eater. He enjoys his indolence and lies horizontal so much that he refuses to rise even for his food-bowl. He will eat a commendatory amount, but I must insert the bowl under his chin in order to generate interest. A few inches away, and he will decide that he can do without sustenance. It is, after all, all the way over there. 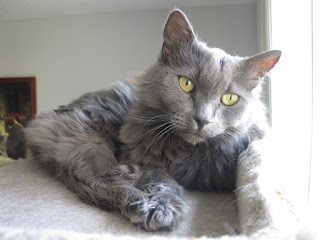 I am not too concerned about this, but it does mean that he ends up with bits of food in his fur. His fur, tremendously soft, is growing out now in a satisfactory manner, but will be that of a long-haired cat, I believe. His mane now starts collecting bits of food, which I have to find and pull out afterward. If Neville would sit up to dine, this would not be a problem. He is not too weak to do so. Even when bone-skinny, he had plenty of strength to run and climb. He is just lazy.

However, like a sudden alteration in what a cat wishes to see on his menu, how he consumes his chosen fare will also sometimes change. I am not concerned. In the scheme of things that could go wrong with a cat, Neville’s eating habits are a very minor concern.

But even those who breakfast in bed sit up for it… 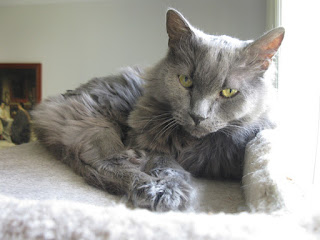