I caught the second black kitten this morning. I’ve named him Philo. I was especially pleased to catch this one, because, with a black cat and a black-and-white cat still to catch, and a black cat and a black-and-white cat already caught and neutered, I would have had trouble distinguishing the pairs, and wouldn’t be sure that I had the unfixed animals until I made the trip to the veterinary hospital. Now, I have only the remaining black-and-white kitten to trap (along with an adult), and I should be able to tell him apart from Rhombus, already neutered. It helped that I kept Rebus and Rhombus at my apartment over-night, thus allowing only one black one to be free and liable to be trapped.

Philo, like his brothers (I am assuming for convenience that Philo is a boy), was panicky when caught, so he is calming down under a blanket. I expect him to go for his surgery later today. 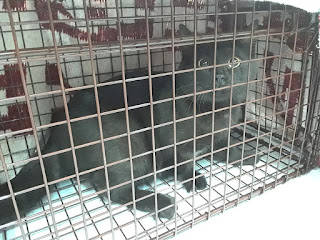 With one kitten remaining, and three to be returned this weekend, I will have to arrange my battery of four traps so as to catch whichever kitten strays into them on Monday. Hopefully, the last kitten, whom I am calling Phineas, will be among those caught, even if others enter the traps, too.

Medallion, however, won’t be with them. She is in a foster-home to see if she can be tamed. She was the most out-going of the five kittens and the most likely to adjust well to life with humans. She did not panic when caught, and has accepted her captivity stoically. If she can be tamed, she will eventually be offered for adoption.
Posted by John Bellen at 7:01 AM