The Rocky Road to Recovery

Cammie went to the doctor yesterday and received an injection of Cerenia to settle her stomach and prevent her vomiting. It appears to have worked. I heard no upchucking during the night, and saw no evidence of it in the morning. I can tell from her behaviour that she is feeling better. When she was ill, she lie in unusual places, and hid. Now, though not fully recovered, I think she is on her way.

But the cessation of vomiting is only half the battle. Now, Cammie must resume eating, and that she is reluctant to do. I can tell that, to an extent, she wants to. When I brought her home from the hospital, I fed everyone, and she was interested in eating. But she would not. She did not last night, nor this morning. I believe that, though her stomach may be empty, the smell of food turns her off.

In any case, I left food for her when I departed for work. The princess is sequestered in my bedroom with all the necessities, including both hard- and soft-food. If she does not consume anything while I am gone, I will need to feed her by syringe. That will be pleasant for neither of us, but her survival will require it. It’s been done before, and has been effective in re-starting Cammie’s appetite - if only because she doesn’t want to be force-fed any more.

In the meantime, my wonderful little Siamese will enjoy as much lap-time as she likes - and, as unlikely as it would have seemed a few years ago, she is enjoying it a great deal these days. 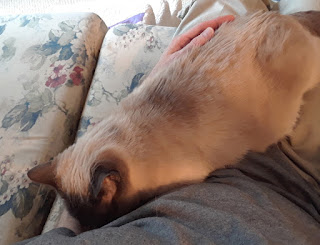