My plans to catch the last of the kittens in the feral colony today have been postponed. It snowed this morning and, though the ferals come out in the cold, they stay in - wherever they may be - when it snows. There isn’t much snow, but there is enough to make it uncomfortable. Only Bijou, the long-haired grey and white boy, neutered last year, ventured out for breakfast. He ate and was gone again. His are the only tracks in the snow, so I know I won’t have luck in catching anyone. I will see about tomorrow.

Though today’s postponement is disappointing, I do have this to show you. This is how Josie is able to eat when someone else is already at the food bowl. She sits and stares at the cat currently enjoying a nibble. She won’t move, and eventually her target becomes unnerved by her eyes, even if he is not looking at them, and moves on. I’ve seen it happen with most of the beasts here. My Chubs has practised it for a long time.

I suppose it is an improvement on the more intrusive action that she had previously used. This was to come up behind the dining cat and place her chin on his shoulder. This appeared to be startling, as well as disruptive, so the stare is, at least, a gradual, rather than a sudden, tension.

It nonetheless gets the job done. 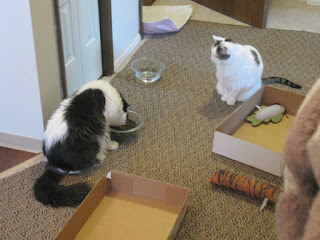 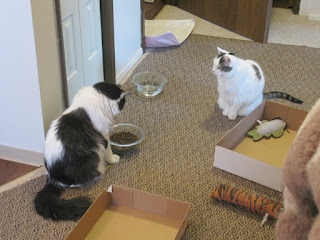 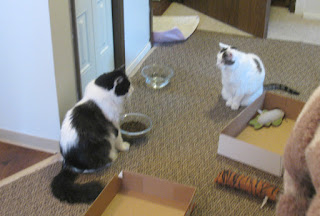