After last year’s successful Operation Slim Pickens, I was hoping that we wouldn’t need to implement any more attempts to trap cats at my work-place. But, as every rescue-group and individual rescuer knows, there always seem to be more cats.

The feral colony behind my work-place had been reduced to five or six regulars. Now, there are, in addition, five youngsters. They are actually quite large now, and may be about four months old. I wish I could have captured them earlier, but they have been extremely shy, and are only now emerging in a predictable pattern. At the same time each day, they eat breakfast, provided by the feral colony’s care-giver, at a specific spot, away from the older cats. This regularity and their relative isolation, as well as the facts that they are both now more accustomed to humans moving about the vicinity and are unused to traps, will, I hope, allow me to capture them. I would also like to trap an adult, whom I have named Bauble, who may or may not be their mother; she may already be spayed and, in truth, may be a male, for all we know.

Where did the kittens come from? If Bauble is not their parent, then they were dropped off at the site. They did not make their appearance until they were fairly advanced into their kittenhood; unlike Beulah, from last year, Bauble is uninterested in being their mother, and has never been seen in their company, which encourages me to think that she is unrelated. In any case, the attempt to trap them starts tomorrow. 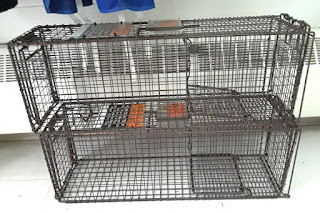