After the Leveller Visits

Neville’s enlargement of his world continues. I won’t repeat what I’ve already described about his explorations, though I will mention that each night, about ten o’clock, he has jumped on to the bed and lie there, purring and flexing his paws, happy at his new surroundings. This of course pleases me.

I had written earlier that Nevsky’s newly expanded horizons coincided with Raleigh’s passing, and that the newest boy probably thinks that now he is free to spend the time with me that Peachy took up in the past. I think that is accurate. But in speaking with an acquaintance about the Nev, I told her that he is now spending a great deal of time on the bed, both during the day and the night, and she responded that it must be because Cammie is no longer spending her time in the bedroom.

This is true, of course, but I hadn’t thought of its effect on Neville. The other three, having known Cammie a long time and lived with her before her blindness, had no reluctance in coming into the bedroom whenever they could. I often had to evict Josie, and sometimes Renn, from the room before going to work, so I could sequester Cammie there for the day. Neville’s trips into the bedroom had been furtive, and he ran out again if noticed. Now, he boldly jumps up on to the bed, rolls about, stretches and snoozes.

My princess is gone. She had priority, on the basis of seniority and disability. Now, however, it’s time for other cats to stake their claims, and on a basis of more or less equality. Death is indeed the great leveller, but it can level things for those who remain, as well as for those who go on ahead. 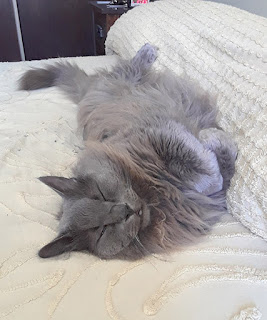