Greetings and a Farewell

Last night brought a new customer to the Café Cosy. I saw Sable sitting by the fence, so I prepared some soft-food for her; she has the hard-food bowl at all times, but if I see her, I bring her something soft. I set the bowl down outside the screen door and came back five minutes later, expecting to see her enjoying the meal, and instead found this newcomer. 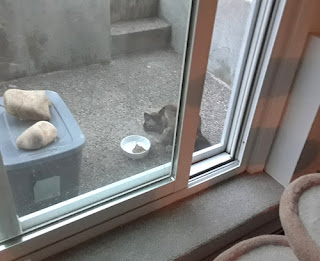 I’ve named her Jessel. I don’t know her gender for sure; I thought I detected some diluted tortoiseshell colouring but the lighting wasn’t good at twilight and, in any case, her patterns may be caused by something other than tortoiseshell hues. Sable was not to be seen and, in her place, Jessel cleaned her dish. 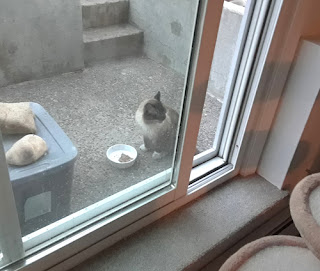 She seems wary but not overly frightened of people. She stopped by my bedroom window after she was finished dining. I will ask about her of my neighbours. But, whether known or not, with a family or on her own, Jessel will have a place to eat and drink, if she wants it. 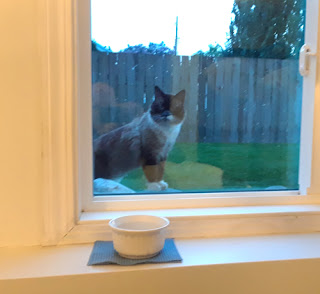 On a related matter, Finn, the long-haired grey outsider cat, appears to be gone. He has not been seen for a couple of months. I had heard that his family was moving, so, thank goodness, they seem to have taken Finn. Readers of this blog would of course take their cats with them; they know, however, that with some people, such inclusion is not a certainty. But Finn was, it looked like to me, cared for, so I believed that he would be travelling with his people. Bon voyage, Finn.
Posted by John Bellen at 7:56 AM