Once again, the traps are out behind my work-place. We have spotted four kittens there; they are likely between two and three months old, but that’s just a guess. I will be trying to capture them and have them fixed.

This will be difficult. These ones are much more irregular in their habits than the previous sets of kittens we’ve trapped. They are sometimes not seen for days, and even the food left for them goes untouched. Now and then, we see only one or two of them, not all, and we don’t always see them in the same places. The only advantage I have in this endeavour is that the little ones are too young to be wary of traps, as traps. 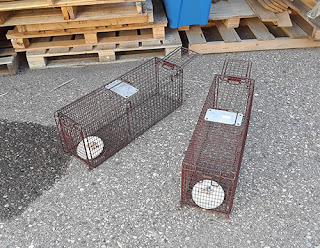 I would also like to capture the cat we believe is the mother, though we cannot be certain. I have named her Bauble (hence the name of the operation, after the fictional gentleman-thief), but, to be honest, I don’t know if she is mother to the kittens, if she is not already spayed, or even if she is a she. She (for convenience, I will use the feminine pronoun) appears irregularly, just like the kittens, though more frequently.

And, as a bonus, it would be very gratifying to capture a cat I’ve named Sunrise, a healthy looking tom who shows up now and then for food. 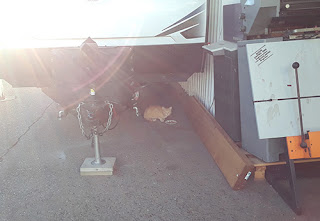 He used to be very frightened of people, but seeing the colony-caretaker bring out tasty sustenance has made him accustomed to the people at my work-place, and, though he keeps an eye on passers-by, he no longer even stops eating when a human walks near. But he too keeps no habitual schedule, and catching him will rely on chance, as it will with the other five.

I will keep everyone apprised of developments but, unfortunately, I don’t expect to be sending any news soon. Unless something in the situation alters, however, the traps will be set almost every weekday. Somecat will slip up eventually, and when he or she does, my trap will be there.
Posted by John Bellen at 10:40 AM