Once again, all my cats are middle-aged or older. I thought I would have Raleigh for a long time, he being barely two when he came to live with me. But now that he has left me, I have oldsters.

I like the idea of having old pets, of giving them a refuge in their latter days. Younger cats have their appeal, too, of course. There’s nothing more adorable than kittens. And juveniles and young adults have almost as much energy as kittens but combine it with some experience and a more mature appreciation of things. And if a young cat needed shelter, I would offer it.

Not as many people want older cats as pets. These animals will cost money as their health deteriorates; they will require special efforts; they will die sooner and leave their human-friend alone. But, if one keeps a pet for its life-time, as one should, then one will be faced with the same difficulties anyway, at some point. Even the young grow old and pass away.

Though Neville is estimated to be about ten years old, Renn is thirteen, Tucker is fifteen and my old lady, Josie, is sixteen. Except for Nevsky, they probably don’t have more than five or six years each, at the most.

But ‘the most’ is what I can give them. An old and tired cat doesn’t ask for much. A soft bed to ease aching bones, warmth to keep away the growing cold, decent food (and really, not much of it, as appetites naturally diminish) to fill the tummy, and a human they can depend upon to keep providing all of that. It’s not much to ask of a world with so much plenty in it.

Last evening, Josie lie down on the bed near me as I was at my desk in the bedroom. I rubbed her head for a few minutes, then she rested in the thick yellow light of the westering sun, coming through the window. Her eyes were closed but she was purring. She was purring at nothing in particular, except perhaps her own contentment. Life for her was quite good at that moment; snack-time was coming, so it would get better - but for the moment, it was good.

I think if I can give an older cat a decent retirement like this, then I am serving a useful purpose. If a cat has not known anything but a good life, then it’s right that her latter years should continue that way. If she has known hardship, then ease and comfort is her due. I wish all could be given this, and maybe one day they will. But for now, I will do what I can with those I have. And perhaps someone will do the same for me in my own time. 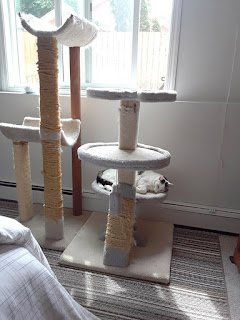