When Neville first came to stay at the cosy apartment, Tucker’s reaction was that of low-grade hostility. This is how he has behaved toward all new cats. The roly poly one spent a long time being squished on the bottom of the totem pole by those senior to or stronger than he, and he has never fancied the idea of having a later arrival climb over him to the penultimate spot while he was still stuck at the end. So he would make sure that the newcomers realised the position: Tucker moved up a slot, while the stranger took his old place.

He would eventually relate to each addition with less antagonism. Parker was assisted by the advent of Raleigh, who became the object of Tucker’s mild animosity. This was lucky, as the sturdy-boy didn’t seem willing to take over Tucker’s low position. Then, it was Neville’s turn.

There comes a point at which each new cat ceases to be a threat to Tucker’s standing. If that new cat accepts the order of things, the roly poly will agree to live and let live. Such has it been with the Nevsky. Tucker doesn’t bother much hissing or grumbling at him, as he previously did. He will, now and then, whap at him, in the lazy way he does - it’s more a matter of charging  (the way a watermelon rumbles down a gentle incline) and placing his paw against another’s body - but he is liable to do that with any cat. Its offensive power was demonstrated when he tried it with Raleigh; Peachy was so easy-going that he didn’t react; the paw stayed in place for a second or two and then was withdrawn.

Neville has not yet understood that he need not fear Tucker’s anger any more. He still will wait out the sausage-cat, if the latter is blocking a route Nev wants to take. And when the former Thin Man does pass close to Tucker, it is in a hurry, and with a series of throaty “er…er…” sounds that constitute the variety of his vocabulary.

As I have described over the past few weeks, in connection with Cammie and Raleigh’s passing, the interaction of cats is fascinating. This is another example of their continuing evolution, though it, in fact, has little to do with the deaths in the family. The cats’ relationships can be complex, but that is to be expected from such complex creatures. 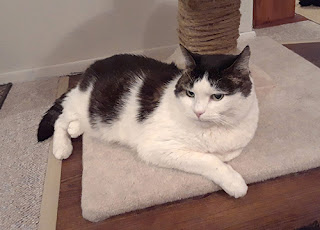 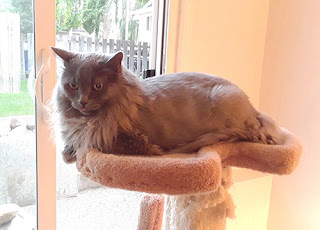