With the excitement of Ambrose’s escape and trapping behind us, routine returns to the Cosy Apartment. Sable appeared, as I mentioned, Wednesday night, but neither she nor Jessel showed up last night, when they could have had a relaxed and undistracted meal each. I hope to see them soon, if only to know they are all right.

Before Ambrose, however, I noted that Sable’s reaction to coming for a meal was dependent upon who was watching her. Renn, who is usually - usually - kind and open-pawed with those with whom he lives, can be quite territorial with outsider-cats, even those as obviously harmless as Sable. When Renn is at the screen of the sliding glass door, Sable keeps her distance. I know she understands that the screen is a barrier; she also understands that it is not a strong one, and she doesn’t quite trust my big boy not to burst through it. 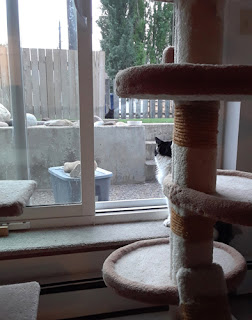 Consequently, I’ve taken to placing Sable’s dish of food on the parapet of the concrete ditch. The height and added distance provides her with a security that a lower, nearer feeding location does not.

Such, I know, are the precautions that outsider- (and even insider-) cats must sometimes take. Their world is not a safe one, and circumstances are not always to be trusted. While I know that Renn would probably rely more on a growl and a hiss than a bite or a scratch, this knowledge is far from universal. Though I know him to be mostly harmless, this cat is, believe it or not, sometimes perceived as intimidating. It’s all in one’s perspective. 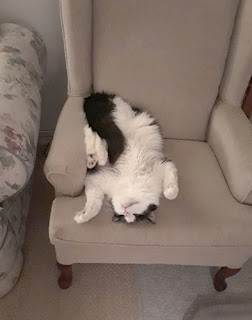