As I wrote yesterday, I am trying to capture cats at work. This morning’s score is discouraging: the traps’ triggers didn’t trip when tiny kitten weights pressed on them; they received a free breakfast of sardines and made their escapes. I will have to set the triggers more precariously. Also, I captured an adult cat who had already made his journey to the veterinary. Tomorrow, I hunt again.

Now, however, I am also going to be trapping at home, too. This is Ambrose. 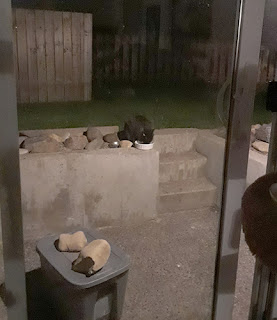 Ambrose is not his real name; it is one I have given him, but it will do for this story. A week or more ago, a young woman emailed the rescue-group with whom I work inquiring if anyone had reported seeing or meeting her cat, who had escaped his home. The description and photographs provided were not familiar to me. Then, on Facebook, she expanded a little on her narration, and reported where Ambrose had been lost. It was on my street.

It was then that I realised Ambrose looked similar to the cat who had recently started coming by my apartment. He shows up at twilight, both the evening’s and the morning’s. He eats rapidly and hungrily, and rarely leaves a morsel; usually, he washes his meal down with a long drink from the water-bowl. Last night, as he was scurrying off following a good dinner, I called him by the name of the lost cat. He stopped, turned and sat down. Now, an interesting coincidence is that I was the one who had responded to the woman’s email to the rescue-group; this is part of my duties. After telling her that no one had reported her lost cat, the cat began coming to my apartment every day.

After Ambrose recognized his name, I called the woman, and she and her friend came over to try to find him. We saw him but he was too frightened and confused to recognise his human. I spent forty minutes slipping in and out of back lawns, between houses and down alleys. We tried treats and tinned food, but nothing would coax Ambrose to his person. We had to give up for the night, and I was worried that our quarry would be too scared to appear again, or even to stay in the neighbourhood. Ten minutes later, though, he showed up at my apartment, hungry from his pursuit. This morning, he appeared again.

I believe that he will fall for a trap. Ignorant of how to survive in the ‘wild’, Ambrose is, I think, hungry enough to ignore whatever vessel food is in and walk into a cage. I will be testing my theory this evening. Perhaps, with luck - if the kittens at work haven’t hoarded it all in the evasion of their own traps - Ambrose will be back home before the last vestiges of sunlight fade today.
Posted by John Bellen at 7:40 AM