A Day in the Life of Ivan Bellenovich

Some days are a convergence of various interests. For instance, yesterday, I arrived home and was greeted as I usually am by Tucker, Raleigh and Josie. The others are more blasé about my return. The first thing I noticed that was out of sorts was that someone had vomited on the linoleum floor. That wasn’t too bad; it’s easy to clean up. Then I found where they had thrown up on the fitted carpet, just inches from the edge of one of the rugs I’d placed to prevent vomit landing on the fitted carpet. In the bathroom, someone had managed to throw up on the wall. That was a new one. I suspect these various-coloured patches were due to Josie, who was unwell in the morning. (She was better in the evening.)

Cammie had of course wet on the soaker pad in front of her litter-box in the bedroom, where she is sequestered during the day. She always does this. She doesn’t need to; she wets in the box at other times. That meant laundry to do.

Renn’s cold has returned and he was sneezing up a storm, often against window panes (more Lysine will be administered for him) and I observed that Raleigh was squinting in his left eye, something he hasn’t done for a long time: that eye was bothering him again. Fortunately, I still have some Tobramycin that hasn’t expired. He would have to be caught twice a day for that.

Someone missed the litter-box in the store-room and wet on the floor there. That was probably my Chubs. She normally puts her bum toward the rear of the box, but now and then she faces the other way and overshoots the box. I place a towel there to catch her residue, but it means laundry has to be done. Luckily, I already have to do it (see above.)

After the litter-boxes are scooped, the store-room floor washed and swept, the vomit treated and the rugs vacuumed, I went to the kitchen to prepare everyone’s dinner. There I noticed that someone had wet on the floor. That was extraordinary. Almost no one goes into the kitchen, except to chivvy me into hurrying with their food. But the urine looked odd. I sniffed it, but it had no smell; it was very diluted, apparently. It was all liquid, so it was very unlikely to be vomit. I wiped it up and started the food.

Then I saw that there were drips coming from the cabinet under my kitchen sink. Not urine: leaking tap-water. I had a leak. After dinner - the cats’, not mine; that comes much later - I removed everything from under the sink, wiped up the water, re-laid tin foil on the floor of the cabinet (I do that to reduce stains and wear on the floor’s wood), found the leak and put a bowl under it.

At last, I was able to prepare food for myself, eat and have a cup of tea. Then I started the evening’s chores.

Every day I usually find something interesting when I go home. Yesterday was just another day. 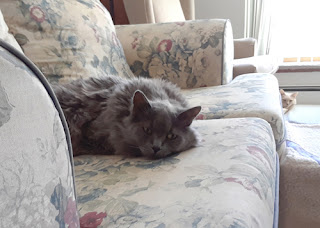