I have not seen Sable and her sister, Sablette, for a long time. These two all-black cats used to come rather frequently, if not regularly, to eat from the food-bowl I maintain for outsider-cats. When I would see them, I would feed them soft-food, as well, often enough for them to start asking for it when they came to visit. Then, they stopped coming. I feared something had happened to them.

Last night, a single black cat showed up at the edge of my ‘patio’, the concrete ditch beyond my outside door. She - I use the feminine pronoun for convenience - was skittish, but came to eat soft-food from a dish when I placed one on the ground. She was hungry: she ate half a three-ounce tin of Fancy Feast, then the rest of it. She cleaned her bowl but remained close at hand, so I emptied the remains of a tin of Merrick (about three more ounces) that no one inside had wanted. She was eating that when I went to bed, being already thirty minutes late for sleep. (Forgive the poor quality of the photo; it was taken in minimal light between courses served to my visitor.) 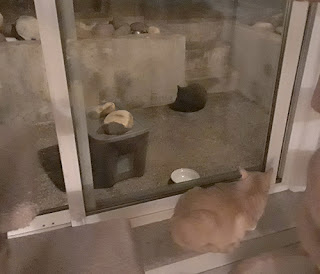 This morning, it had snowed, and a thick layer of precipitation lie on the ground. The bowl was covered in snow, but had been previously licked clean. Whoever she was, she had been hungry. There was no other sign of her.

Was she Sable? This one was less confident than I remember Sable, so it may have been Sablette, the more timid sister. But if Sable had lost her sister, or had suffered some other trauma since I had last seen her, who knows how she would now behave. Then again, it may have been a different cat all together. I will ask my neighbours if they have observed this cat, and who they may think she is. If she is Sable or Sablette, where has she been all this time, and what happened to her sibling? If not, who is she?

The most I can assert for sure is that she had a good meal, perhaps for the first time in a while.
Posted by John Bellen at 1:13 PM