Words for a Cat

Cammie is a good example. As some of those who have read this blog for a while know, my princess has a severe allergic reaction to almost any food; it causes her to throw up. It often happens late at night, long after she has eaten the offending food. I have been successful for some months in keeping her episodes at bay but they have occurred without her eating anything of which I am aware, so I am always fearful of hearing her wretch.

This she did; in fact, twice, at about the same time (approximately four o’clock a.m.) on two mornings, several days apart. Upon hearing the sound, I immediately woke and jumped from bed to see who was upchucking. It was Cammie, and my heart sank. I couldn’t return to sleep after that, for her episodes almost always include two instances of vomiting close together. Fortunately, nothing further occurred. I don’t know what caused the incidents - and twice, at that - but she ate well at breakfast, and her behaviour denoted no cause for alarm. (Anxiety)

Cammie has also taken to wetting in front of the litter-box that is placed in the library. I have two in the store-room and one in the library, in case the others are in use and someone needs to go right away. Cammie will usually amble into the storeroom and use the boxes there. She is not suffering an infection or obstruction; she just has her spot in front of the library litter-box. I had placed, even before she commenced this habit, a soaker pad in front of the box, if only to catch the grains of litter thrown out. She wets in the same spot on the soaker pad, the choice of which alternates among six that I have. (Frustration)

Late one night, I heard her get up from her heated bed. I knew where she was going, so I headed her off, directing her to the storeroom, and closing the door to the library. (I don’t do that all the time as it severely reduces the amount of space six cats have to avoid each other.) I heard her digging in the litter in the storeroom, so I returned to bed. The next morning, I found that she had indeed wet in the litter-box. And pooped on the rug outside the storeroom. (Revulsion)

Then there are the days when I am at my computer and she will decide she wants some time with me. She will sit on the edge of the bed, leaning toward where she knows I am sitting. She will periodically squawk and walk away, only to come back. This is my signal. I quit what I am doing and lie down on the bed. Cammie crawls onto my chest, bumps her head against my chin several times, lies flat and starts purring while I pet her and we talk. (Delight)

For all the problems that they give me, the financial worries, the messes that I must clean, the anger at endless choices of food disdained, the fatigue that comes from going to bed too late and waking too early because of their needs, I require only to think that some day they will all be gone, and I will be without them. That’s when my cats’ presence has the final word. (Joy) 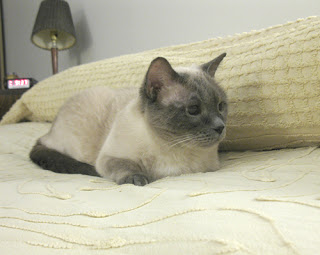