The Loneliness of Distrust

Raleigh is making more progress all the time. Lately, I have found him in the bedroom, on the cat-tree next the window, late at night, after I have gone to bed. This is because I leave the window open, if only a  fraction of an inch, to have fresh air while I sleep. Peachy has discovered this and comes to smell the outside fragrances. The significance of this is that he was afraid to come into the bedroom while I was present, not so long ago.

He enjoys his chest-rubs. He probably likes them more than any other physical contact though, for a shy cat, he does enjoy being petted and stroked. I can give him a chest-rub any time, but he expects it after his snack in the evening. He will stop waiting for more food (demonstrating that he is full for the time being) and come over to me, talking. And the point of this, at least so far as this current entry is concerned, is that Raleigh will allow me to do anything while I am rubbing his chest.

I have cleaned his eyes and even cleaned his bum while rubbing his chest. It isn’t easy, but I’ve done it. (Just as it’s not easy taking a photograph while I am rubbing his chest…) Other times, he would not be content with me trying something like that. Indeed, to pick him up and cut his claws is still a chore - though not a difficult one - because of his dislike of being held.

It is interesting not just that he trusts me, but that he trusts me to do anything so long as I am doing a certain something else with him, which is itself a sign of trust. I am happy that he has arrived at this place in our relationship. I hope to see him on the bed at night in the future, though that may be a while yet.

When I think back to how he behaved when I first saw him outside, scared and hungry, and then, when I learned how much he wanted to belong to someone, I think that among the many kinds of loneliness, one of the worst must be the loneliness that comes from not being able to trust anyone, a loneliness reinforced by fear, even despair. Raleigh will never know that loneliness again. Perhaps one day, it will become a stranger to all homeless cats and dogs. 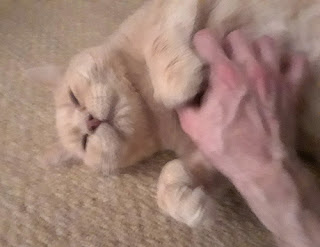