With the Wind My Rival

Southern Alberta is famous - or notorious - for its wind. It’s often a ‘chinook’, the name for the region’s föhn wind that, in winter, sweeps down the leeward side of the Rocky Mountains, raising the temperatures, melting the snow and drying the moisture. The wind can be very strong, sometimes blowing as fiercely as 100 kph (62 mph), though more often 50 to 60 kph (31 to 37 mph). This winter - in fact, even the late autumn - has been the windiest most people here can remember. In terms of the number of windy days, the number of consecutive windy days, and the strength of the wind, this season has been exceptional.

There are several spots on my bicycle route to and from my workplace that are prone to particularly strong blasts of wind. One is the bridge that crosses over railway tracks. I sometimes must lean against the wind which blows perpendicularly against me and threatens to knock me against the railings, or over the parapet all together.

Yesterday, I was riding along the bridge when a gust struck me. My front rain-fender was not, as they were when I was a child, a metal semi-circle bolted to the hub of the wheel, but a plastic shield snapped on to the under-side of the frame where it faces the front tire. I write that it was, because the wind caught it, pulled it off its snaps and threw it down the street. I halted and turned, not long enough even to get off my bicycle, never mind to retrieve the fender. I was, however, in time to see the wind scoop it up from the asphalt and throw it off the bridge. The last I saw of it, it was sixty feet away and thirty feet in the air, flying off eastward over the trains stopped under the bridge. I watched it until it was a spot in the early morning sun, and wished it a fair voyage.

Though we are accustomed to harsh wind here, it seems, like weather everywhere, different this year, more extreme. I’ve never seen it abduct a bicycle part before, and think it may be only a matter of time until it takes the whole machine, and the rider with it... 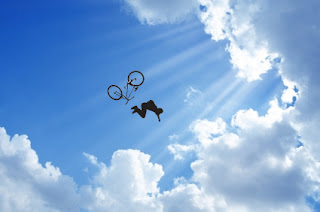