It Would Probably Have Been a Bad Year, Anyway

Cammie was sick on Monday. She was fine Sunday evening but I knew immediately upon waking the next morning that she was out of sorts. She remained in her heated cat-bed, and did not get up to stroll about for her morning stretch as she usually does; had no interest in food or water, and didn’t get up on my bed to snooze before I left for work. She was no better when I came home and had thrown up at some point during the day.

I didn’t think this was one of her usual episodes, which I always ascribe to eating something, however small, to which she is allergic, which is almost everything. She had not thrown up during the night but, rather, later during the day - her vomiting usually comes sooner in such an episode - nor did she try to eat but not feel like actually eating. There was something that suggested another cause, but I thought of making a veterinary appointment for her nonetheless. Considering the current restrictions on social interaction, I was not looking forward to that.

Tuesday morning, I right away noticed a change in the princess. She was more alert, and she was ready to eat. She had a light breakfast, but it was food in her tummy, and when I came home in the afternoon, I saw that she had eaten some of her hard-food and drunk some water. She had not thrown up. That evening, she had a good dinner.

Today, before I left for work again, Cammie ate some food, but not a great deal. She was a little worse than Tuesday but still better than Monday.

This may be just a passing bug, a pale reflection of what the human world is experiencing, perhaps. It doesn’t have all the symptoms of her usual allergic reaction, and it has some that such an episode does not bring. Whatever the matter, the way Cammie was feeling on Monday took another year off my life. I hope she recovers swiftly and well enough to put a few months back on. 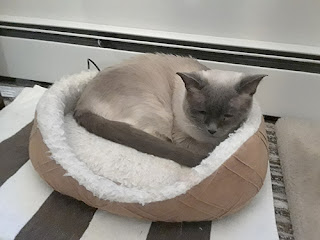