As Close as Fuzz on a Peach

Raleigh is an odd cat. While he will react to other felines, almost always in a friendly fashion, he doesn’t seem to think that he himself will elicit any response from others. He has no sense of another cat’s personal space.

I woke up in the night during the weekend to violent growls and hisses from Cammie. Turning on the light, I saw that she had climbed to the top of one of the bedroom cat-trees; the air outside was warmer than usual that evening, and the window was open. This had attracted my blind princess, and she had ascended to sniff the fragrances of the outside. It had also lured Raleigh. The Peach was calmly crouched beside Cammie, a bewildered expression on his face, his innocent mind unable to grasp that she was enraged at his proximity. Because of Cammie’s sightlessness, I had to urge Raleigh down, so that Cammie could make her retreat.

Raleigh has attempted friendship with Renn and with Neville, but neither of those fellows seem to find the idea appealing. This does not affect Raleigh’s position or passage next to them, or next to any other of the beasts. He will squat beside anyone, trot by, and in one or two cases, over, others, without regard for their presence. If, as sometimes happens, Tucker will whap at Raleigh, the latter will move away; the next time, he will walk just as close, oblivious to the previous whapping.

Peachy carries this characteristic to interaction with me, as well. Once he trusted me enough to approach (and I still need to be slow in my physical contact with him), he had no problem with putting his face as close as possible to mine, a level of comfort not always seen in cats.

The cats of the Cosy Apartment have generally been very conscious of each other and, unfortunately, rather stand-offish. If they lie next to each other, it is accidental, and one or another is probably too lazy to move after getting comfortable. They will sniff each other now and then (especially Renn, with that big nose of his), but being in the same location at the same time is not something any of them relish. Yet to Raleigh, it matters not.

How did he decide on this? Was he raised in great closeness with other cats? Did this behaviour develop after he had been lost or abandoned? His is a very gentle nature; he wants no trouble from anyone and wants to give it to none. I’ve seen him whap - and that in self-defence - only once (when Renn’s sniffing grew too invasive). Otherwise, he has been more of a pacifist than Josie. It’s a character I wouldn’t mind seeing my other beasts adopt. But I would still like to know how it came to be. 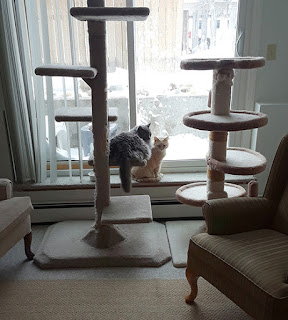 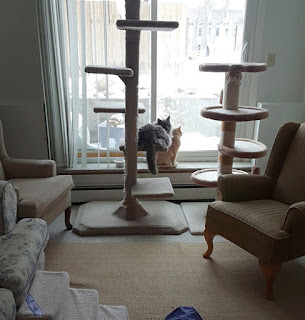 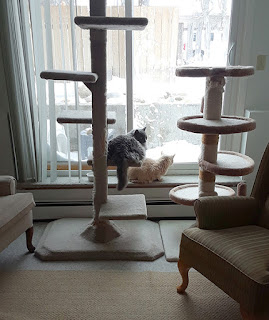