Better and a Little Easier

My foster-cat Neville gave me some good news last night, though not initially. At six o’clock, I tested his blood-glucose and found it at 20.0. For a cat who lived with it between four and eight for the final third of 2019, that is very high. But I  injected him with one unit of glargine, the same insulin that Tucker receives, and by 10.30, his number was a more satisfactory 13.0. That is hardly what I want, but compared to the higher number, it is what I will take. And in fact, I suspect his nadir (the lowest the ‘curve’ of his blood-sugar will reach before it begins climbing again) is actually lower, but I had to get to bed at some point. Tucker’s nadir is usually four and a half hours after his injection, but most cats’ are later. Come the weekend, I will test Neville more toward midnight. 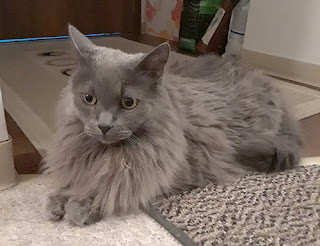 Also on the weekend, I will test his blood in the morning. If it is, as I suspect, high then too, I will consider a unit of insulin twice a day. And once the testing is over, he will have nothing more to dread from poking and prodding except the daily injections, which, considering where they are given and the thinness of the needles, are hardly to be felt. I will of course perform ‘curves’ on him, as I do with Tucker, but that is an ordeal only monthly.

I appreciate the good thoughts and hopes given Neville by the readers of this blog, and word of their experiences, too. Roberta’s message that her Jeremy went for four years without insulin before requiring it again, while undoubtedly disheartening for her and Jeremy, did show me that this phenomenon can occur, and that it is not isolated to my boy.

So Nev begins again. With the right dosage of insulin at the right times, he may yet free himself of the need for medicine. If not, he will have relief from the effects of diabetes for as long as he needs it.
Posted by John Bellen at 6:48 AM