Good But Not Easy

Well, my programme to start Neville on insulin again to lower his blood-sugar levels has hit a snag. The insulin isn’t working.

I measured his glucose level at six o’clock Sunday morning and found it to be 15.2. This is not dangerously high but of course it is too high for health. I wanted to give him his dose in the evening so that I could check his blood some hours later, to judge its effect. At six p.m., his number was 15.1. I administered a single unit of insulin and measured Nevsky’s blood at 10.30, close to my bed-time. It was 15.1.

I have been adept at counting for some years, so I immediately knew that this number was the same as the one four and a half hours earlier…

This was disappointing, and a little puzzling. The insulin should have had an effect, even a small amount such as one unit. However, I recalled that when I took Neville in, and was given a couple of insulin vials by his previous care-giver, she had said that one of the vials had been accidentally left out of the refrigerator for some hours. Insulin needs to be kept chilled to stay potent. Naturally, at the cost of insulin, one doesn’t want to throw any out, so I kept both vials, not sure whether the amount of time one had been left uncooled would have ruined it. I don’t think I have had to give Nev any insulin since his second arrival. (He came to stay with me for a week prior to when his long-term fostering began, and it was during that week that I had injected him with insulin, but at no time after.) 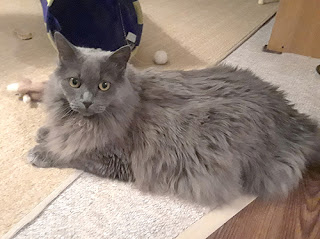 Now I think I know that the insulin left out of the refrigerator is ruined. That is the likeliest explanation for the complete lack of change after his injection. There is a chance that Neville has become insulin-resistant, though, since he hasn’t had any since September, that is improbable; from what I understand, such resistance comes after prolonged exposure to the drug.

I do have options. I have a second vial of the same kind of insulin (ProZinc). This is insulin made specifically for cats, and has been very successful in treating feline diabetes. It is also expensive, and the cheapest outlet is a town some distance away. While picking up the insulin there is practicable now, if I need to do it myself, I could have difficulties; even with someone else in the rescue-group collecting it, it is inconvenient at best. The insulin that Tucker uses, Glargine, works very well but is not specifically for cats; it is less expensive than ProZinc, and its source much more conveniently placed. Either way, I will try a different container of insulin and see how Neville’s numbers react to it.

The poor guy is still quite upset by having to give blood. The actual sampling is smooth: once he is in place, he remains still and poking him causes minimal movement. He nonetheless dislikes it. I was therefore hoping to reduce the number of times I had to stab him by achieving a good measure of the insulin’s effect. Now, that will have to be done again.

Even when life is good for a cat, it’s not always easy. 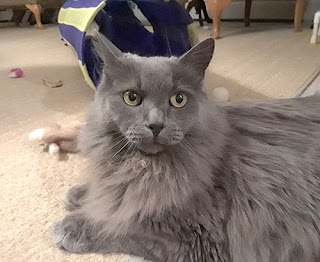