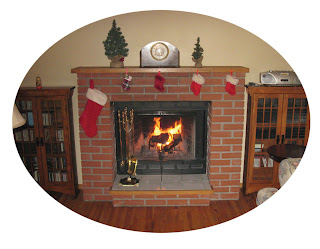 Home Is Where the Cats Are

I have moved my residence. My cats have come with me. I anticipated problems, principally with the two males, Ren and Tucker, based on their earlier behaviour when presented with changes of home. I was surprised and pleased when none of the cats had an adverse reaction. 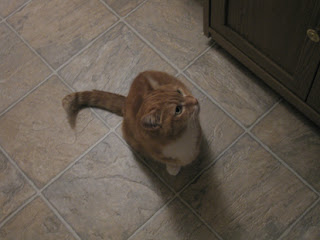 My four feline roommates actually had a better time of packing and moving than I did. Packing was an ordeal; a person never realises just how many individual items he has until he has to put each one into a box, resulting in dozens and dozens of boxes. The cats were seemingly unperturbed by all this fuss. They used the boxes, which were everywhere in the apartment, as new pieces of furniture, and as a playground. I would see Josie hiding behind a box, readying to launch herself at Tucker as he walked around a corner. Ren lie on top of a box and lazily tried to touch Tungsten as she passed beneath.
And now we are all in our new home, and each of the cats is finding his or her favourite places. Tungsten, never one for the exotic, likes to snooze on the bed or finds a spot downstairs in the basement when she wants to be alone. Josie had been partially ejected from her favourite spot on top of the cat-tree in the apartment, as Ren liked that place, too. Now, two cat-trees provide vantage points out the front window, and Josie isn't fussy as to which she lounges upon. Ren enjoys viewing the vicinity from the cat-tree or reclining on one of the boxes I've yet to unpack. Tucker can often be found on one of the cat-trees' lower platforms. 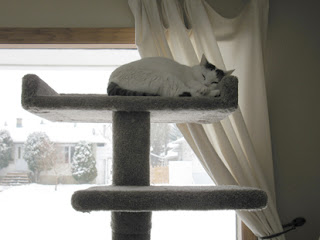 Certainly, the house provides advantages that the cats have taken up with enthusiasm. There is much more room in which to run, and I've seen Tucker and Josie chasing each other, especially up and down the stairs leading to and from the basement. Sometimes, I'm not sure who is pursuing whom, or even if a chase is involved. I'll hear running, and it may simply be running for its own sake. But all the cats except Tungsten - whose dignity limits such flamboyant exercise (and whose weight doesn't need it, anyway) seem to enjoy the extra space that they now have.
Some changes to behaviour are strange. Josie has taken to rolling in the bath-tub, when it's dry. Perhaps she likes the residual smell of bleach, used to clean the tub. Maybe it's the feel of the metal tub, in contrast to the fibreglass of the apartment. At least once a day, I see her waddle into the bathroom, jump over the rim of the tub and enjoy a good series of revolutions. 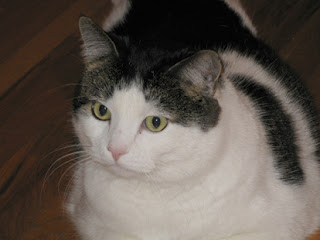 Tucker now sleeps full-time on the bed. Tungsten doesn't care for the crowd that's there now. Unconcerned with the other cats walking past her during the day, or with another curled up almost touching her on the couch, my orange top-cat is most fastidious as to her company at night. I'm glad she allows me room in the bed somewhere.
Once in a while, the size of the house - though not large, its developed basement makes its living area about twice the size of the old apartment - creates a consternation in the cats. Josie, in particular, sometimes feels a bit lonely. I will hear a distant cry, as of a lost animal; I call out that I'm upstairs, in the sitting room, or in the kitchen, and my Chubs will come trotting up from the basement and come over to me for a rub and a pat on the head. She was just making sure she wasn't alone. 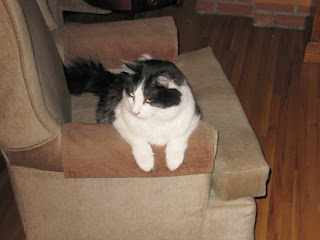 For that matter, my own security is challenged once in a while. In the apartment, I liked to keep track of the cats, to make sure they weren't somewhere they shouldn't be, or somewhere I couldn't find them. I would periodically search them out, for my own peace of mind. Now, I do the same thing, though the need is more practical, I think. The doors in the house lead not to a corridor in a locked building, but to the outside world, and even inside, there are more places for a cat to come to grief, however unlikely that may be. And now, of course, finding the cats when I worry about them is more difficult. I always find them safe - safe, usually sleeping and wondering what the fuss is about.
But I continue to check on them nonetheless.


P.S. As an addendum, I may add that this weekend, I officially adopted Ren. He'd been a member of the family for long before this, though, and paperwork means nothing to him, but it formally means that if he ever goes to a new home, it'll still be with me. Just as practically, it means that Tungsten and Josie are stuck with him. You can guess their thoughts on that - or at least Tungsten's... 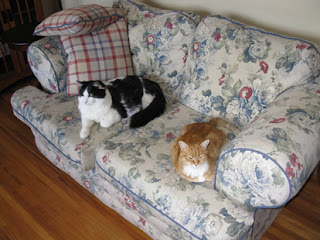