There was an early New Year’s Eve guest at Café Cosy last night.

I had seen Arliss with Sable a few nights ago but, as usual, he kept his distance. I had recently bought some new cat-food and no one inside liked it, so I have been leaving it outside over-night for any late patron at the café. The temperatures have been bordering on freezing but the food stayed edibly soft during the dark hours, and was always gone by morning. Before dawn today, I was retrieving the empty bowl and saw Arliss over by the property’s fence.

I tapped the bowl and he appeared interested. Unusually, he was without Sable and, just as unusually, he did not run away when I wanted to talk to him. I wondered if it had been he who had been consuming the bowl’s contents in the night, and was now thinking he would be given more. If so, I wasn’t about to disappoint him.

I hurried to put some food in the bowl, and saw that he was waiting, another unprecedented act. He stayed put, a few yards off, while I placed the bowl on the concrete floor of the ditch, and retreated inside. He came right up to the food, which I’d put near the door, and ate it without sign of trepidation (even while being observed by Zofia). After his meal was done, he moved away, apparently satisfied.

I am pleased at this, as this is the first time I have been able to give Arliss soft-food, barring the possibility that he’s been eating from the over-night buffet; in any case, it was the first time he had remained, waiting, for a meal. I would like to get to know him better. From his girth and the condition of his coat, I can’t judge him homeless, though that is not impossible; the fact that he comes around rarely also suggests another, and on-going, source of food, and certainly shelter. But I would like to win his trust, nonetheless. He’s seen that I provide his friend Sable with food; now, he’s had it personally from my hand.

I hope to see more of handsome Arliss in the new year. 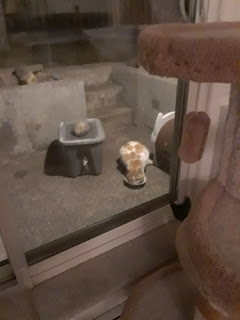 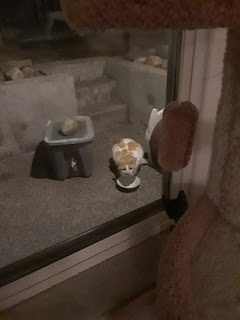 Talk to the PAW

I hope everyone is having an enjoyable Christmas. Ours here at the Cosy Apartment has been good. We are getting in a lot of naps and other kinds of relaxation. I have a new plan for Neville’s diabetes, and will let readers know more of that once I see some results, one way or another.

In the meantime, let me tell you about this guy. I have noticed something about Hector. When he is presented with food he does not like, he will, after sniffing at it, flick one of his forepaws in the air. It’s much like a dismissive wave of a human’s hand; an indication of disdain at what he has been given. He won’t do it after he has eaten an amount of enjoyable food, even if he leaves some in the bowl. It occurs when he is asked to consume something which does not meet his standards, or when I should know that he is sated, and wants for no more. Then I receive the paw of disdain.

There was a time when this guy was homeless, and eating scraps, you know… 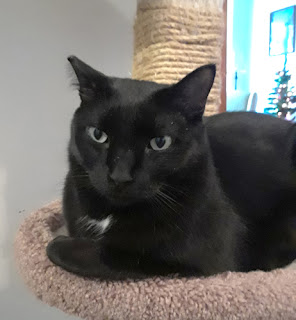 We Wish You a Merry Christmas!

It’s almost Christmas. This year, I brought in some more foster-cats – three, I think; I lose count sometimes – one was adopted, one died and one remains. Horace is among his new family, learning their ways, and showing them his. Minuet came and charmed all those who knew her in the short time she was with us. Kitten Zofia continues to bring liveliness to the Cosy Apartment, often at four o’clock in the morning.

Below is my Christmas card for 2022, the outside and the inside. (You can enlarge it, I think, by clicking on it.) It seemed fitting that Madame be included, and the card was designed before Ivory was adopted. I hope his new people will forgive this trespass upon their prerogative.

May this Yuletide bring joy and peace – contentment, at the least – and a little ease in what always seems a busy year.

God bless you all. 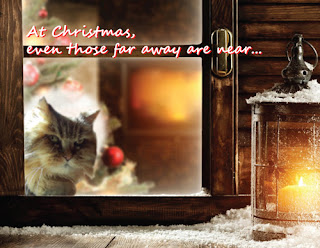 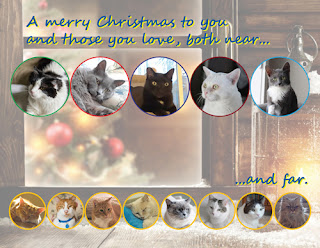 It’s been a while since I have written about Renn. Renn is an unspectacular fellow, and so doesn’t get much publicity here. When he does, it’s usually to do with his health. 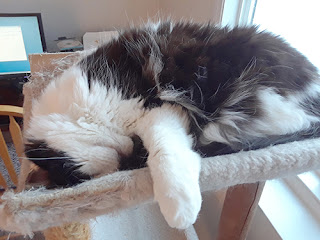 Fortunately, his health is - knock on wood - good. Wednesday was an off day for him: he threw up twice, and didn’t want anything to eat. I was afraid that I was at last going to have to use the Cerenia I bought for him. But he recovered by Thursday, and ate well several times during the day. That is how it usually is with my big boy; he will suffer a day of feeling poorly, and then recover. After a length of time not wanting to eat, he will almost make up for the loss with a renewed appetite later. (He has his two favourite kinds of hard-food to choose from at each meal; periodically, he will eat some soft-food, now and then a surprising amount. But it's mainly the hard.). If he continues thusly, I won’t complain too loudly. His kidney disease is undoubtedly progressing but, at fifteen, I think he is doing quite well. 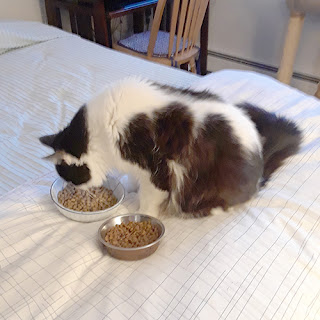 And he is slowly, very slowly, learning to live with Zofia. He doesn’t always tolerate her proximity, especially if she wishes to play with his tail. But if she is feeling the need for company, without cuddles, he may tolerate her. 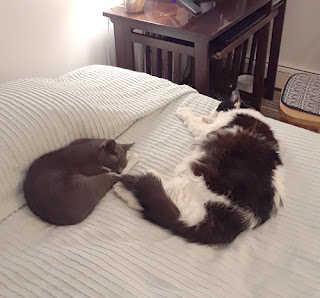 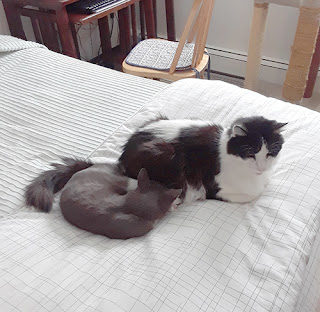 And he and I still have our fun together. He almost never plays anymore, but we sit together while watching the odd movie; he visits me at bath-time; he comes out to lie near by when I relax on the sitting room couch with a cup of tea, and he is almost always on the bed in the night. We are well into our twelfth year together, and Renn and I are both quite satisfied with things.

And Patty, you didn’t mind seeing pictures of Renn sleeping; I hope these will please. 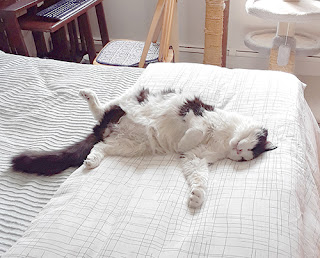 The Kitchen is Always Open

My outsider cat, Sable, didn’t show up for food Tuesday or most of Wednesday. There were no paw prints in the snow leading to my outside bowls. The precipitation here was heavy and the temperatures very cold. I think at such times Sable stays in her shelter - wherever and whatever that might be - for as long as possible, to keep warm, and ventures out only when hunger drives her.

She showed up late last night. I watch for her. She has the hard-food bowl to eat from - I always keep that filled - but soft-food, warmed up, is what she enjoys and waits for. But in such temperatures, she won’t wait long, so I keep my eyes open for her. My beasts help: if I see them staring outside or hurrying to the door to the ditch, I know someone is out there.

I believe that in better weather Sable has other sources of food, but I suspect these sources are covered in snow, or on holiday, as she was quite hungry. Though previously I thought to limit her consumption to one small tin of soft-food, I can’t give her only that, especially in this weather, and when I think she has no other restaurant at which to dine. Café Cosy’s favourite customer ate almost three tins of soft-food last night. I had just broken the ice in the heated water-bowl (it’s too cold for the bowl to keep its contents liquid) before she arrived, so she was able to drink, as well, if she wanted.

As Sable ages, I worry about the elements hurting her, particularly in such extremes as last night’s. Life is tough for outsider-cats, ferals who don’t trust humans. There may come a time when Sable comes no more. Until then, though, Café Cosy will be open. 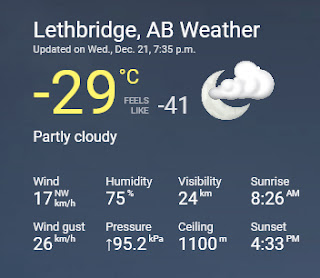 The Cosy Apartment sent a double bill to play at the veterinary hospital yesterday. Zofia went for her booster-vaccination. She was scared and hid under my coat while waiting for the doctor. But she took her needle without complaint. Her heat cycle seemed to have ended on Tuesday; the veterinary said that the length of cycle depends upon each cat, and the initial cycle can be short. Little Miss Zed will be spayed on January 3rd, before her next cycle. 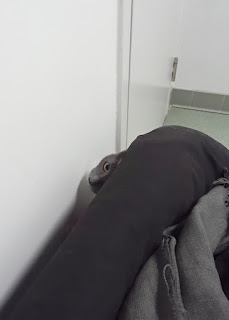 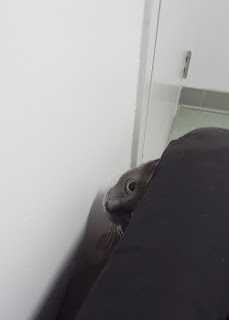 Neville was at the hospital to have a sensor implanted that will monitor his blood-glucose numbers without blood-letting. He has had one before and, of course, Tucker was a pioneer in this device in our town. Derry, over at “Musings on a Small Life” has had several in place over the past couple of months. I have been having trouble managing the Nevsky’s diabetes; his numbers are too high, and increasing his dosage of insulin does no good, and may even lead to higher numbers because of a bodily reaction. Now, I can receive information about his glucose levels every fifteen minutes if I want, and acquire an accurate and more detailed picture of his situation. The device works for a fortnight. Nev fussed about having the device put on but, now that it is in place, he isn’t bothering about it at all. 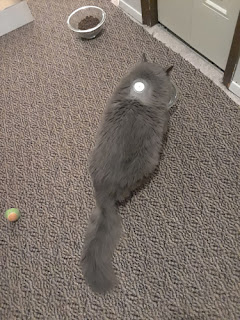 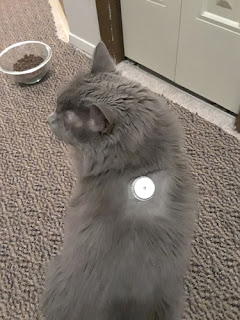 Now that these tasks are done, we can, I hope, settle down for an easy Yuletide holiday. If the cats don’t trouble themselves with festivities too much, they can at least be free from the worry of further veterinary visits.