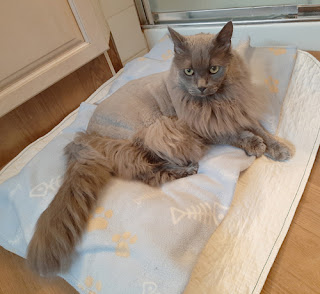 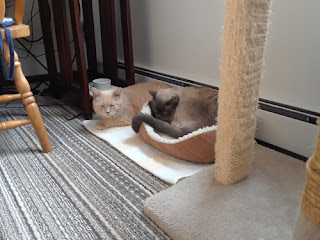 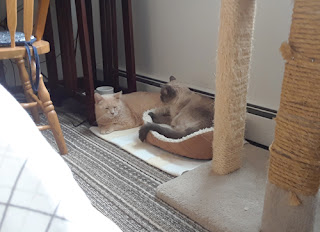 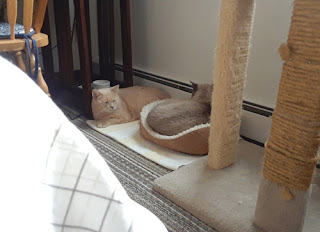 I don’t believe that Raleigh thinks he will win every feline heart. I think it is simply that he cannot imagine anyone taking offence at his presence. He will walk in front of other cats, step over them if they are lying down, and put his nose into a food-bowl, to see if they’d like to share. There is no challenge in these actions, no daring; just an obliviousness to any annoyance he might be causing. It’s difficult not to sympathise with such innocence.
Posted by John Bellen at 9:12 PM 13 comments:

When the Problem is the Solution

Raleigh does have his troubles. This morning, I could tell he wasn’t feeling good again. He didn’t want any breakfast, which, while in keeping with some days over the past couple of weeks, has not been the case the last few days. But I also noticed that he visited the litter-boxes five times while I was feeding the others. I looked in the boxes, and there were two tiny poops. Raleigh was constipated.

No wonder he hadn’t felt like eating. I had visions of, first, forcing his Prednisolone into him, then forcing hair-ball remedy into him, as a lubricant, until I could buy something more fitting. Then, about half an hour later, I noticed him cleaning himself. I thought he was feeling a bit sore back there and was trying to ease the discomfort. But as I approached, I smelled something. Sure enough, Raleigh had deposited the biggest crap I’d ever seen him deposit, right in a cosy corner of my sitting room.

Normally, this would, of course, be a problem. But I couldn’t be angry at him. If he went, he went; that was the important thing. Where it came out was unimportant, really. Secondly, he probably felt the urge and wasn’t about to deny it, after not being able to do anything about for who knows how long. So I cleaned it up, washed the carpet and fed Raleigh. He ate; not a big amount, but enough to stop his tummy from growling, and enough to consume his medicine, too. I was greatly relieved. I imagine he was, too.

I’m sure that wasn’t what has been troubling Peachy lately, as he has pooped more or less regularly over the last week. Nonetheless, I am pleased that he didn’t have this adding to his troubles for long. While I would have preferred him to have made it back to the litter-boxes in time and not do what needed doing on my sitting room carpet, in this case, the problem was a solution. 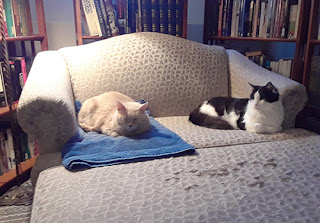 He Lives in Hope

Raleigh is still battling whatever malady assailed him a week and a half ago. He doesn’t feel like playing and his appetite is diminished. I was able to get him some Mirtazapin, to stimulate his appetite, in transdermal cream, to be rubbed in his ears. He has no problem with that, and he ate decently this morning.

What I find endearing about him is that even when feeling unwell, he is friendly and sweet-tempered. He continues to try to find a friend among the other beasts. He sometimes lies near Neville, but also moves close to Renn. My big boy doesn’t mind, though he is more apathetic than welcoming. Even so, Raleigh makes the best of it. The little Peach lives in hope. 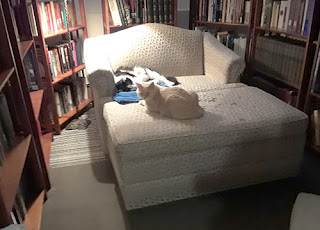 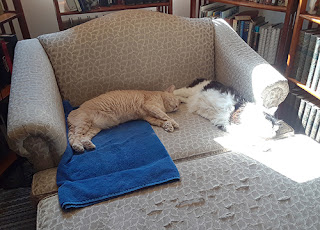 What I See at Work

This is what my computer-screen at work looks like. Larger than life, but not as soft as the real thing. 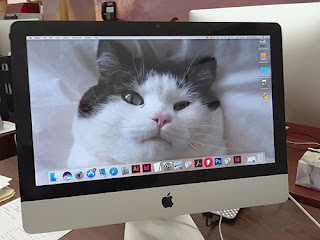 A Little Bit of Neville Now and Then

Yesterday, I was speaking with the founder of a rescue-group in close affiliation with the one of which I am a member. It was they who rescued Neville; he was transferred to our group - and my home - afterward. I had not seen until then a photograph of how he looked just after he was rescued; Nevsky was found in a ditch, and barely able to stand. He’s come along rather well since then, I think. 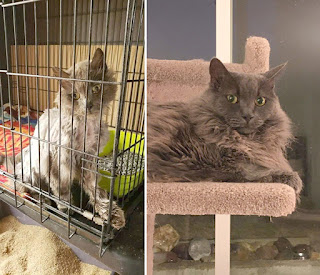 The Return of Yellow

Spring is slowly - very slowly - returning to our part of the world. I see a few green blades of grass, but no leaves on the trees, not even buds. There are higher temperatures - tomorrow is expected to rise to 20° C (68° F), which is just right for me.

The best sign of spring is the sunshine. The sun has made its way north again - or, rather, the Earth is tilting toward the sun in a way that gives the northern hemisphere more direct access to our star. Whatever one’s perspective, the sun is starting to throw its beams back into the cosy apartment once more, and the cats are finding them.

One of the few things more brilliant to the eyes than the warm, yellow light of the sun is a cat lying in it. 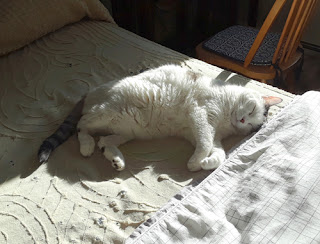 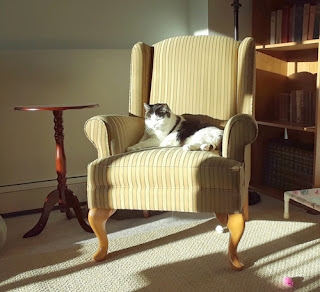 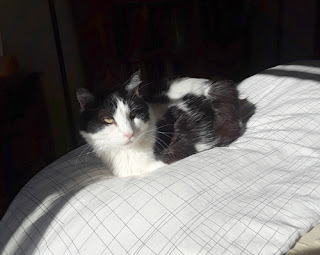 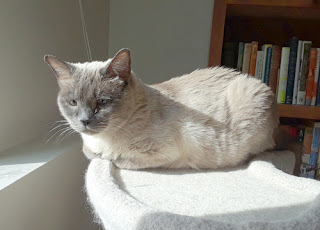 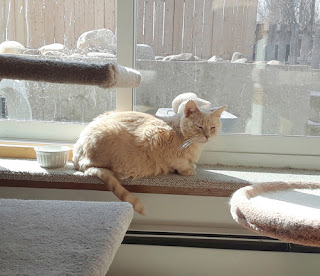 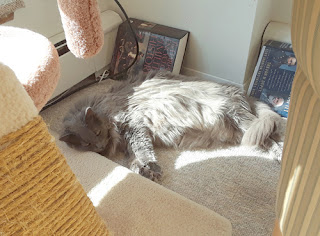 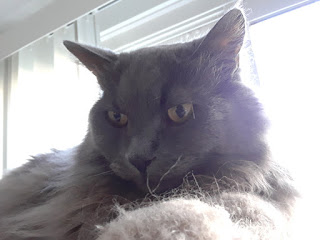 Neville is very slowly becoming accustomed to me. He associates me too much with being poked with an insulin needle, or having blood drawn from his ears. I am trying to change that by often petting and stroking him.

He likes to have me pet him all the way down his back, and I can start him purring that way. Something I noticed about him is that when he purrs, the fur on either side of his lower jaw vibrates. It’s due to its length, I think, and how it grows. Whatever the cause, it is rather amusing to watch - though I won’t tell Neville that. 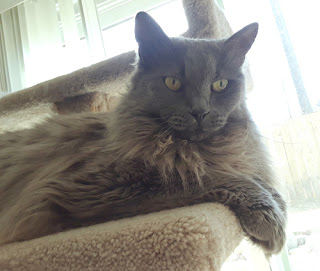