It’s been hot in southern Alberta lately. The temperature yesterday reached 30° Celsius. For those of us who remember real measurements, that’s about 89° on the Fahrenheit scale.

The reaction of cats to heat is something I find strange. They abandon sleeping on the bed for the most part. Tungsten, loyal beast that she is, starts out the night with me, tucked up against me as always. But she disappears at some point. She will come back once, twice, sometimes more, but just as frequently, she will go elsewhere. The other cats find cooler resorts in which to sleep.

During the day, they seek out hardwood and linoleum. Josie in particular favours the corridor leading to the bedroom, while the others sprawl where they can. Yet warmth, crazily, remains in demand. Yesterday, following dinner, after the cats had eaten and cleaned themselves, they relaxed to let their meals digest, as they always do. Where did I find Josie? On the ottoman in the back parlour - in the sun.

The boys are a bit more reasonable. Tucker likes a place on the cat-tree when I position it behind the screened front door, while Renn enjoys spreading out at the top of the tallest cat-tree.

The temperature is supposed to diminish tomorrow, and to drop to 12° by Friday (about 51° or 52° Fahrenheit). That’s the way spring is here. I’m hoping for a more equable summer - nothing over 25°, preferably 20°. But I’ve lived here too long to expect my demands to be met by meteorology. In that case, I’ll take a lesson from my cats, and just adapt as best I can. 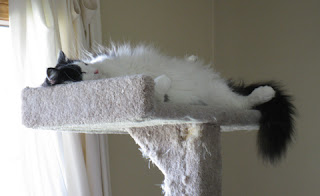 How They Are Coping

Luther’s integration with my cats is not progressing as well as I’d like. He thinks himself a top-cat, a notion which probably stems from his time outdoors when he had to fight to survive. As well, he has been neutered very recently, so that operation has yet to take a full effect. In any case, it is not contributing to tranquility in the house. 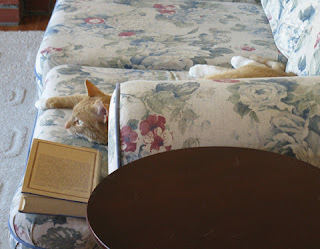 There has been tension, and this is leading to a bit of discouraging behaviour on the part of my cats. Tucker in particular is suffering a bit of despondency. He is a very sensitive cat. Ironically, he was the one who at first allowed Luther to come closest to him. Tucker was resting on a cat-tree in the bedroom and magnanimously allowed the guest-cat to lie on the neighbouring cat-tree. My roly poly was quite untroubled by his presence, it seemed. Luther decided to sniff Tucker. The latter realised this and took offence. Luther nipped a big chunk of fur from Tucker’s rear end, whereupon Tucker jumped to the floor with Luther in pursuit. I caught the new boy and tossed him into isolation. 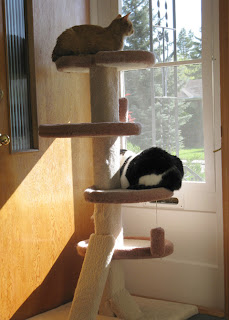 A few days later, Tucker was lying on the bed and Luther jumped up near him. Tucker again was generous enough to share his space. I thought, foolishly, that I could leave them alone for a minute. While I was gone, I heard growling and yowling; Tucker came running out of the bedroom and I found Luther innocently lying near where Tucker had been - a tuft of black and white fur in his mouth. 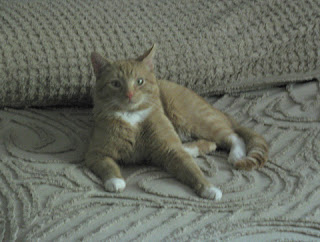 I find it hard to credit the new boy with malice. I think that there would have been more violent action, or more serious results, if Luther had really wanted to fight. Nonetheless, his behaviour does not lend itself to tranquility. 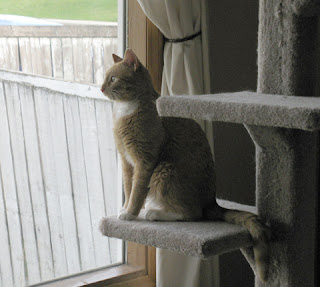 Renn does not like the visitor, either. He growls at Luther as soon as he sees him, and becomes agitated if he comes within four or five feet.

Tungsten has a long history of despising new cats. She and Luther have clashed thrice now. My tiny terror has not given ground to the intruder but, on the other hand, knows that she would probably not win a sustained battle. She has, I think, gained Luther’s respect. Just last night, they came within sight of each other in the back corridor. Tungsten growled mightily and Luther backed up and kept backing until he reached a wall. Then, when Tungsten was turning away, followed her. That will lead to trouble. 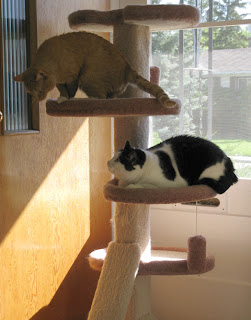 I’m worried less about physical trouble than the emotional. Josie is largely unworried. As a pacifist, she remains aloof, as best she can, from such common strife, usually taking the high ground - the top of a tall cat-tree, in her case. Renn dislikes Luther but other than keeping those golden eyes peeled for the newcomer, does not seem too bothered. Tungsten has come a long way from the days when Josie came to live with us, and the orange one became depressed and sad. She undoubtedly longs for what she thinks of as the good old days (when there were just the two of us…) Tucker is the worst affected.

Tucker is slowly, very slowly, recovering from Luther’s descent upon us. My roly poly, after his unlooked-for tussles with Luther, started hissing and growling at me and his fellow-cats, especially, for some reason, Josie. That has subsided somewhat, though he still does it. He has started playing again, which he had ceased, and yesterday I watched him play by himself, chasing a fuzzy mouse he was knocking about. I was very happy to see that. 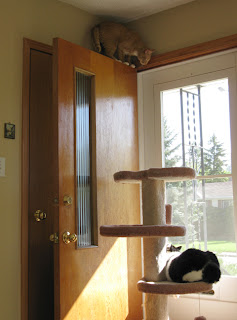 He has a long way to come back. He’ll be fine again, though it may take a while. In the meantime, he has taken once more, while I sit on the couch, to lying beside me on its arm, and again makes a special trip across a whole room just to rub up against me. He doesn’t do it as often as he once did. This is his first experience of a new cat. Considering his past, I can’t blame his alarm. But as long as I make sure that he knows he’s safe and loved, he’ll be all right. They all will be. 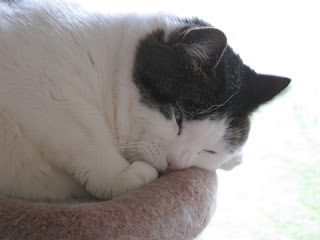 I have a house-guest. His name is Luther. Readers of these articles of mine will probably not be surprised to learn that he is a cat. 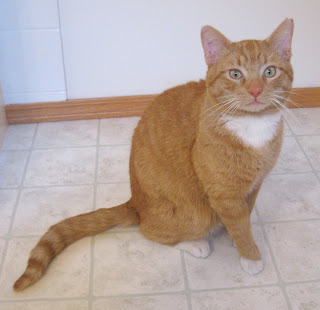 I didn’t intend to take on another foster-cat, but this one was an emergency. When foster-homes are filled to capacity, every new cat brought in by a rescue-group is an emergency. Luther, who was nameless at the time, was a very friendly cat, a stray, who was being fed by supporters of the Lethbridge PAW Society. When they found themselves no longer in a position to help Luther, they asked PAW for help, and the cat was brought in.

While outside, Luther was involved in a tremendous fight, which left deep bite marks on the base of his tail and cuts and abrasions elsewhere. The wounds he suffered caused no little concern to his rescuers. Feral cats are sometimes carriers of feline immunodeficiency virus, which can seriously inhibit a cat’s immune system; it is spread by deep bites. A cat can live a long time despite having FIV, but his chances of a healthy life are reduced, and people are wary of adopting a cat with FIV, especially if they already have pets. 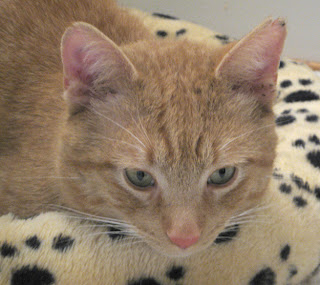 Fortunately, Luther tested negative for FIV. His chances of adoption increased greatly. Everything else is in his favour. He was obviously from a good home, for he is friendly, and not at all shy. Perhaps it did not stay a good home, or perhaps he merely got lost. Was he an outdoor cat with his original owners? Who can say. But whatever his origins, he is, as I mentioned, friendly. He was brought to my house and within a quarter-hour was on my lap. He bumps his head against my hand and arm and loves attention. He’s reckoned to be young, about a year old. I don’t know if he’s fully grown yet, but he is strong; his body feels dense under the fur, and of the fight he was in, he could probably use the old implication, “You should see the other guy.”

His appetite is certainly that of a growing boy. He eats quite a bit of hard food and loves the soft stuff. He of course prefers Fancy Feast, but his litter-box production could be of a higher quality, so he is being fed a correspondingly higher quality food. He was a little less enthusiastic about that, but took to it eagerly enough. 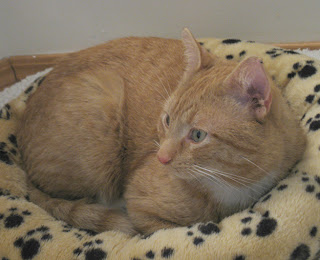 But more than anything, Luther wants his freedom. He is currently in the isolation ward of my house - the downstairs bathroom. He is resourceful in his attempts to escape. The bathroom has a window high up in the wall. One night, I heard a crash downstairs. Luther has a collection of metal food- and water-bowls, and I thought he had tossed the lot against the door, reminiscent of characters in 1940s prison movies rattling their tin cups along the bars of their cells. He had, however, tried to reach the window by way of a narrow glass shelf between the basin and the mirror. The shelf is not fixed in place and only rests on pegs. He had flipped that into the ceramic basin, probably while standing precariously on it with only his hind feet. The shelf is tempered glass, so it survived. It has now been removed for safety’s sake.

The downstairs bathroom is spacious, as such chambers go, and has much that a cat needs - litter-box, food, water, toys, bed - but no window. So in the evenings, I take him upstairs, running the gauntlet of evil cat stares from my beasts, and put him in the back parlour. There, he can have a window, open to the screen, and enjoy fresh air, smells, sights and sounds. But even when I keep him company (or perhaps because I keep him company), he wants to get out.

He has a very strong yowl, and he can be relentless in its application. He was neutered less than a week after he arrived at my house, and this operation has curtailed his crying quite a bit. But in the parlour, he knows that I and the cats are but a wall away. My house is about sixty years old and has large cold-air outtakes grates in the base of the walls. Through them, a person, or cat, can see another room from a neighbouring one. Luther will crouch at one of these and yowl into it, crying like a baby. This does not engender sympathy among my crowd. Tungsten will counter-crouch on the other side and hiss at him. 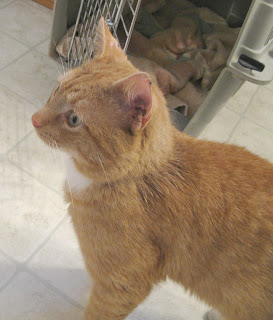 He does enjoy the advantage of a window, though, and has his quiet moments. Now that he has been neutered, he will receive his vaccinations. Then I will introduce him, slowly, to the resident beasts. Tucker has taken Luther’s advent badly. The others don’t like the new boy’s intrusion, but the roly poly one hisses and growls quite a bit now, deciding that Josie is a substitute new-cat, and hissing at her, too, for no discernible reason. Tucker may think that, as low cat on the totem pole, he has sufficient weight upon his head and doesn’t need more.

Luther won’t be staying, though. He is, I believe, highly adoptable: young, strong, friendly, playful, energetic and healthy. There are other plans for this boy, and I hope for a swift adoption to a loving home. He deserves it. After weeks, possibly months, as a homeless stray, he remained joyful and enthusiastic for human company. May the near future bring him happiness. 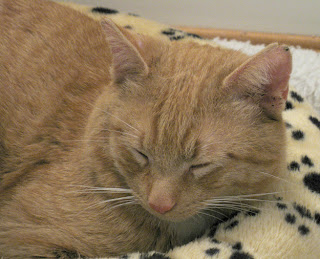