The late and very lamented Bear-Bear was a people-cat, so much so that he largely ignored other animals, to concentrate solely on humans. What a fellow he was.

My friend Renn is also a people-cat. He likes other cats, as well. He is Tungsten’s pal, always taking the opportunity to sniff her nose - or her other end - and keeps trying to get close to my foster-beast, Cammie, who treats his efforts like a tap that runs with both hot and cold water. But above all, Renn loves his humans.

Possessed of a cool and logical mind, my big boy is a scientist, specialising in the study of water. But his heart is susceptible not to reason, but to the lure of human company. He loves lying with me on the bed. He is always the first of my roommates to join me there at night. If I wake in the middle of the night, I will inevitably hear a repetitive ‘rrrrrr rrrrrr rrrrrr’, and feel heavy footfalls making their way up toward me. To Renn, even the middle of the night is an opportunity for some interspecies comradeship.

If I go for a nap during the day, I need only lie on the bed and I will hear his sturdy tread trotting to the bedroom. How he knows the difference between me sitting on the bed and lying on it is a mystery. But he is a learnèd cat.

When I sit on the couch, perhaps after dinner, relaxing with a book and a cup of tea, Renn will eventually come to join me. He will lie against me, and likes to feel the reassuring touch of my hand on his flank or, better yet, on his chest.

Periodically, he will find me while I am writing or reading, and come up to me, his back arched and his big floofy tail wagging like a hound’s. I can’t resist him then and we spend a few minutes in mutual admiration. He is not a lap-cat, really, and has only rarely jumped up there. But if I pull him up to rest there, he will purr contentedly for a long time.

What draws these animals to their humans? Why do they choose to like people, or some people in particular? Renn doesn’t like raised voices. There have been times when, angered by a dish that decided to spill its contents (it’s no use blaming me; I didn’t do a thing) or a cat-toy that leaped into my path, I will curse with some vehemence. Renn hurries away at such moments, crouching low, heading for the basement as a refuge. He has known fury; perhaps he has been its target. But this has not soured him on humans, and when I assure him he is not to blame, he slowly resurfaces, and knows all is well.

It’s cats such as Renn who have made pets of their species, chums for humans who expect nothing from them but companionship. I have mentioned before that he reminds me of a dog. He is my faithful dog, the sort who shows us that fidelity and friendship are not exclusive to canines. 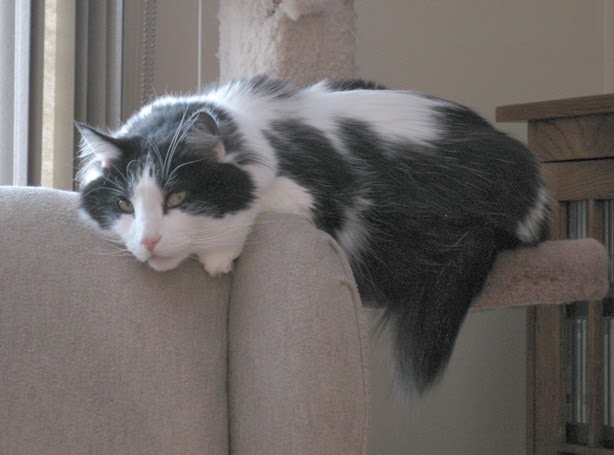 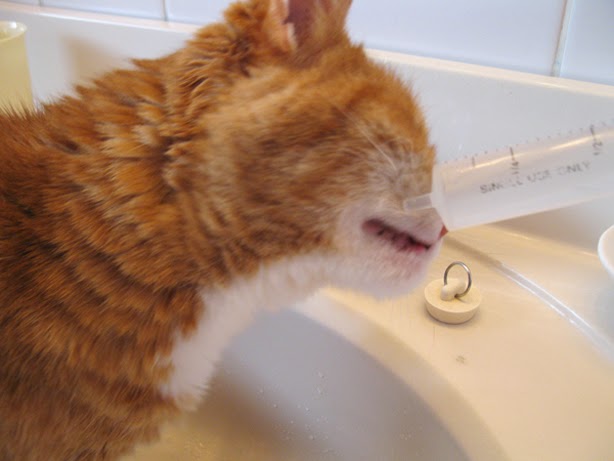 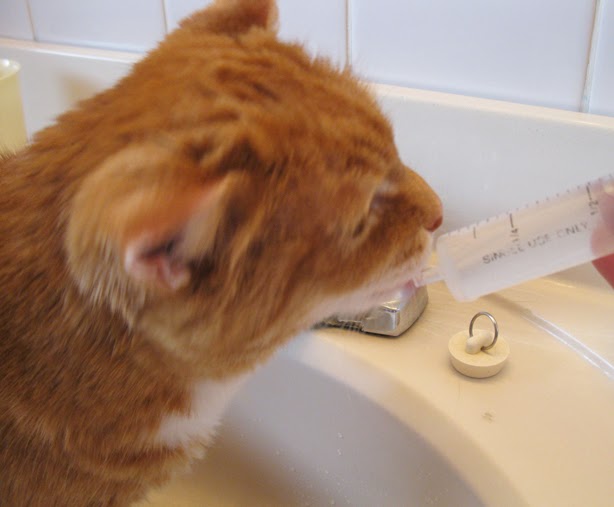 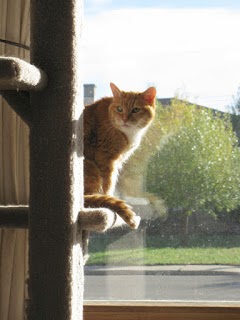 That doesn’t mean that my long-cat isn’t missed. Each morning, when I leave for work, I say good-bye to my beasts, my remaining foster-cat, Cammie, included, and I find there is something amiss in counting only five fuzzy heads. You see, what my world reverted to was not a world without Bear-Bear, but a world without his sad and deteriorating condition. It remains a world with him in it, but he’s not there.

It feels as though he is somewhere that I can’t find him, and that I’m excluding him from all my activities, that he’s being left out. I’m sure that sensation will fade, and probably soon, but until then, I feel as though I’m turning my back on the BB.

But there is still plenty to do with my other cats. None is sick, thank goodness, though Tungsten continues to require her hyperthyroid medicine, and I am learning about feline kidney disease. I think that will involve my tiny terror more and more in the days to come.

The cats still surprise me. Not long after Bear-Bear passed away, I woke in the night. There are usually three cats, sometimes four, on the bed with me these days, all the perma-cats except Tungsten, who joins me half the time; the other half is spent in the warmth of her heated cat-bed. I don’t blame her for that. Tucker, Renn and Josie find their special spots on the bed and hem me in as best they can. My Chubs is normally right against me on the near side of the bed.

I woke this night, as I usually do each night, at some point and, as soon as my eyes opened, saw Josie’s white face staring at me in the gloom. She was purring. Most of the time - in fact, always - the Great White needs petting to purr. Her motor starts more readily than it used to, and more frequently. But it normally needs to be revved up by stroking. Not this time. This night, she was simply looking at me and purring. 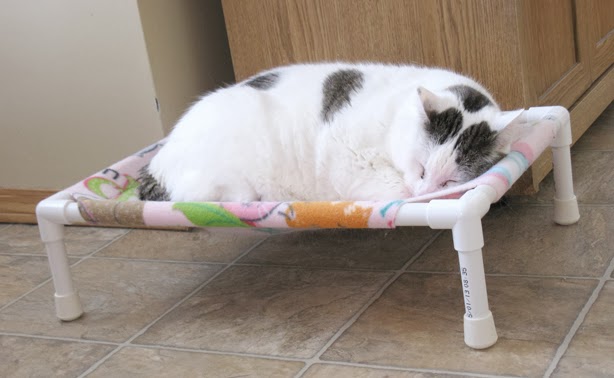