Back to the Three Cats I Have

I’ve lately devoted much space in my articles to Tucker, my foster-cat. That’s because he’s been going through a health issue, and his status changes from week to week. Fortunately, that status has improved, and continues to do so. He must wear his cone for at least another week, but his problem is getting better. It’s been a good thing that, as health troubles go, it’s been minor.
But what of the other cats in my house? If they could read, I’m sure they’d be demanding equal space. So this time, I will write about them.
Tungsten was quite grumpy one day this past week. She gets like that sometimes. Nothing will be good enough for her. She hissed and growled at Tucker, which she hasn’t done much of in the past - I think the cone unnerves her - then hissed at Renn and even, later on, at me. The only one who escaped her wrath was Josie, and that’s because my chubby pacifist hid under the bed at the first signs of a fight brewing. I don’t care for being hissed at, and I let the orange one know it in no uncertain terms. It’s the only time we have words. My stern rebuke merely made Tungsten sulkier. 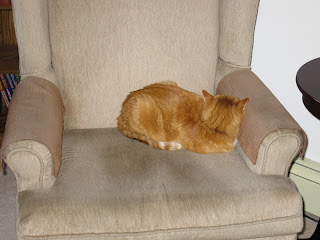 But Tungsten is a moody one, and the next day, she couldn’t get enough of me. She lie on my lap while I ate breakfast, and lie on my lap while I wrote later. She insisted on lying on my shoulders whenever I was standing. That, to her, is the best place, reclining on my shoulders, facing my left (when she’s on my lap, she points right), turning her head to rub its fuzzy top against my face, and purring all the while. She was over her grump. 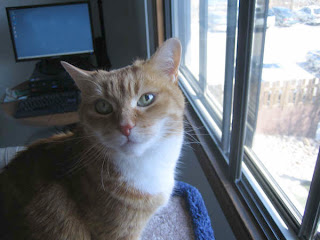 When that tiny cat wants on my shoulders, she’ll stand on her hind legs and gently tap my arm with her paw, both paws if the situation is urgent. Sometimes, if I am trying to do something that requires - or at least is best done with - free shoulders, such as shaving, I will move her out of range. But nothing is out of range to a determined cat. I will see Tungsten’s eyes move from one of my shoulders to the other, deciding which will give the best chance of a firm landing. She’s silent enough to catch me by surprise now and then. Few things are more startling than turning in time to see a cat in mid-flight, half a second away from landing on you. I can gauge the need to cut her claws when she lands a little off and must pull her way up to my shoulders with her talons...
Renn’s a cat with long, soft hair, and I took a comb to it this weekend, thinking that I’d better keep up with his grooming. Long hair can get matted easily. But to my surprise, there wasn’t a knot in it. He did love the combing though, rolling about, unable to decide which side should receive the most attention. 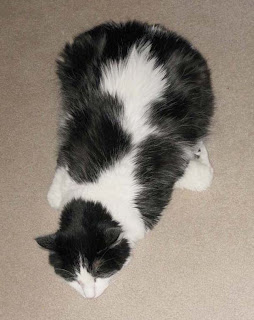 He likes to catch me when I’m sitting and come up to me with his back arched and push against my legs. I’ll rub his head and, especially, the sides of his body and tell him what a great cat he is. He’ll start his rough purring, which is never continuous but is blurted out like puffs of strained air, and move away, only to wriggle back again for more attention. He likes sitting next to me, too, on the couch. Sometimes, it’ll be for a long chest-rub, though other moments, he’ll curl up against a cushion and just keep me company. 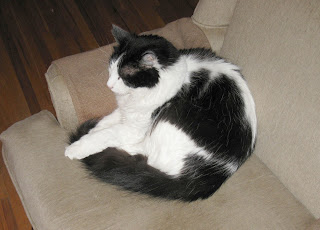 Renn follows me about the house, as does Tucker. Josie is the loner of the group, and Tungsten has been with me long enough to be confident of her place. Renn hasn’t always had things easy, and is a gregarious cat; he likes to know I’m near. When I go downstairs for more than a few minutes, I hear a heavy thump and a series of patters on the ceiling; I know that in half a minute, my big boy will appear downstairs to see where I am. 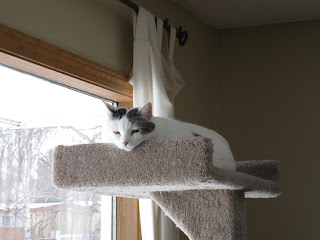 I mentioned that Josie is a loner. There are nights when she doesn’t come to bed, preferring a solitary perch high on a cat-tree. When I am sitting on the couch with Tungsten on my lap, Renn to my right and Tucker on the couch’s arm to my left, Josie will be on a comfortable cushion of a chair at the dining table. But my Chubs still likes to know she’s appreciated. This weekend, while I was writing at the table, she got up to get some face-rubs. Afterward, she lie down on my papers, looking so relaxed that I felt I couldn’t move her. So I put a cushion on the table near me and coaxed her on to that. She snoozed beside me for an hour or more.
She is not due for her annual check-up until summer, but I will keep an eye - or, rather, an ear - on her breathing until then. I hear the air coming and going through her little nose, sounding a like a distant car-horn descending the scales. This happens principally when she relaxes. I know she needs to lose weight, but I hope there is nothing wrong with her breathing. When she sleeps, she can snore, the noise resembling a wheezy old furnace. Otherwise, she is healthy and has become quite active with some of the toys the cats received at Christmas. 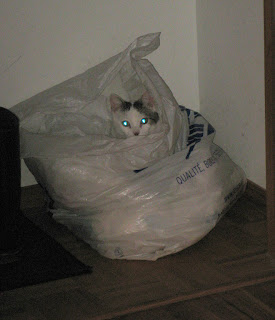 Among the many expressions of affection I receive from my cats, I think one of the nicest comes my Chubs. Once in a while, Josie will be thinking her lonely thoughts and suddenly decide that she will show me what she thinks of me. She will waddle over to where I am, rub up against me once, then leave again. Just so I know. 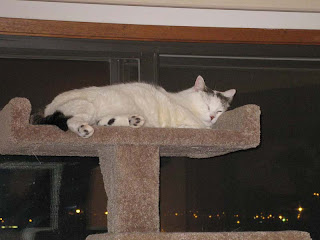 Posted by John Bellen at 6:54 AM No comments: