Happy New Year to You!


Tonight comprises the last few hours of 2017. For me personally, the year has been adequate. It hasn’t been bad, so I will count it among the good ones. For many others, and the world in general, I think it could have been improved. But I have hopes for 2018.

In the meantime, I am grateful for what I have. It is at Christmas and the turning of the year that I reflect most upon what I have and what I do not have; much more now than on Thanksgiving Day. And my benefits out-weigh my deficits.

The past several days have been snowy, and very cold. Right now, the temperature is -32°, and -39° with wind-chill. Tomorrow afternoon, it’s predicted to be -13° and -22°, respectively. Consequently, I am particularly pleased to have a snug little home, and to be able to provide the same for five cats. I am still employed; I have food; I have many books, and I am able to watch a movie once a week in my own home-cinema. (All right, it’s a television set attached to a dvd player, but the cats have never been to a cinema, so they don’t know the difference. Shhh.)

I am at a stage of my life at which I will not be too upset if things merely remain static, instead of improving. I find myself mildly astonished to want better and more things for other people than for myself; more people need them than I do. This change from my youth is probably due less to selflessness than to awareness: it occurred to me that I may have more than I deserve, so that in demanding ‘my fair share’, I could lose a quantity of what I already possess. Better to point out that others deserve things, than to draw attention to the fact that I may not!

So I will content myself with being thankful for what I have, and to wish to each of you reading this – and each of you not reading this, too – a happy new year: may it start out good and just get better from there. 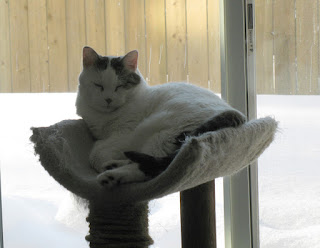 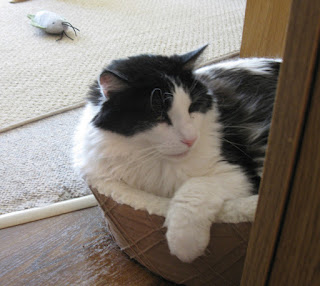 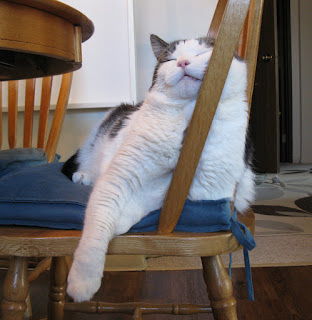 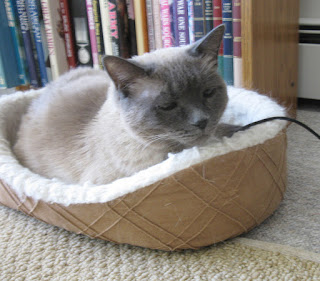 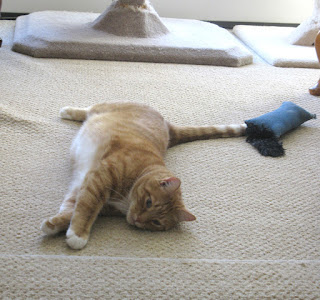 
Most cats suffer to some degree from what the French call “le finique”. This condition, referred to by ancient veterinarians as “non cogito, gratias” or “felix apathia”, was studied by the noted naturalist and animal-conversant J Dolittle under the title “no-way-uh-unh”, and commemorated in the Bard’s famous soliloquy, “Perhaps another time, sayeth the cat.” Retired British Army officers sometimes call it simply, “blasted cheek.”

While some may describe le finique as nothing more than the arbitrary contrariness of the average feline, it is more accurate to state that it is a particular behaviour, usually an aversion, to something which is otherwise constant, consistent and unaltering in a cat, until it changes its mind.

Take, for instance, Parker, my orange foster-cat. I am of course pleased that he is with me, for he is diabetic and, along with my perma-cat Tucker, also diabetic, may be monitored regularly. An aspect of his character for which I am grateful is that he will eat almost anything. This is not to write that I feed him almost anything. Rather, he will consume whatever the others will not. Careful to keep his carbohydrates to a minimum, I nonetheless am able to foist upon him the leftovers that my other beasts do not want at meal-times.

Parker is not particular about what he eats. Every flavour finds favour with his palate. I do not over-feed him, but when one of the others (who, together, constitute a most choosy group of diners) decides that he does not want all of a particular dish he is offered, it will then be saved for Parker’s next meal. And yet…

While perfectly willing to devour a spoonful of paté that Cammie or Renn disdained, Parker will refuse to countenance a self-contained piece of food that another cat has had in its mouth, or even licked. A small cube of chicken or ham, a treat from a Christmas dinner, will be welcomed by Parker as a tasty addition to his dish. But the same item that Tucker or Josie has first picked up and then dropped is considered no better than a morsel infected with botulism or ptomaine. If the situation were reversed, and the portion were something that was well-liked, it would not matter to one of the perma-cats if Parker, or anyone else, has tried to chew it first. A toothsome morsel is not to be wasted. But the mere trace of another cat’s saliva on a bit of meat is enough to induce a bout of le finique in the sturdy orange-boy. The same slobber may be an integral part of a blob of Fancy Feast, and Parker will trill appreciatively. Applied to the exterior of the food, it is anathema.

But we who care for cats know well the vicissitudes effected by le finique. We learn to live with them, as we do other afflictions, such as heavy snows in winter, dry skin or politicians. So when we see a little bit of food we had offered to our cats with such hopes of eventual consumption, now abandoned on the floor, no doubt stepped on while in stocking feet, we simply sigh and, with perhaps a Gallic shrug, say, “C’est le finique.” 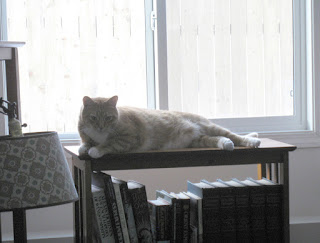 There has been some adjustments made to the tube-house. I have witnessed one of the black cats from the neighbourhood investigating the new shelter but, so far, no one has entered it. At least not fully - someone wet on its entrance, twice.

Though the tube-house was not utilised previously, other cats did examine it at various times, and may have left their smells. Perhaps this caused a more recent cat to deposit his or her mark there. In any case, I was afraid that this would deter its current use, so I disassembled the tube-house and removed the offending part. It was merely a form-fitting piece of Styrofoam covered in very thin felt. In its place, I laid out a soft and, hopefully, warm blanket. The ceiling of the tube-house’s interior is lined with a curved, removable cushion, and there is another rectangular cushion under the blanket. I washed the entrance, as well. With luck, this will be enough to eradicate the offending odour. I sprayed a small amount of catnip within and, for added incentive, put a small bowl of treats inside. 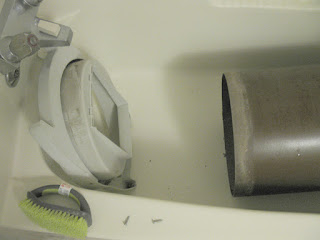 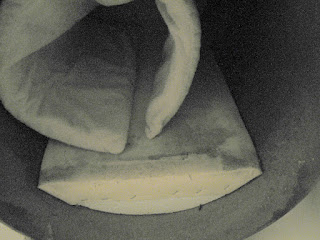 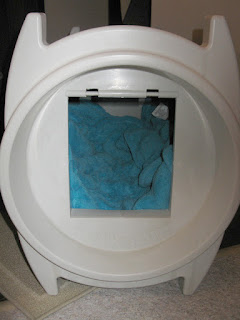 As you can see from the accompanying photographs, the apartment doesn’t have the space - or the basement - of my former house, and so, when I don’t want to work in -25° temperatures (which would soon render my hands inoperative anyway), the bath-tub must suffice. A good cleaning afterward should set all to rights in terms of hygiene.

I think straw may be coming next week, so that will be added to the comforts of the tube-house when I have it.

In the meantime, the water-bowl remains a good investment: though ice has been creeping around the inside of the bowl, there remains enough unfrozen water, even at -25°, to satisfy an outsider cat’s thirst.

Temperatures are supposed to rise soon (though not above freezing). That, I think, will be good news for cat and human alike.
Posted by John Bellen at 10:36 AM 7 comments:


I hope everyone’s Christmas Day was enjoyable. Mine was good; quiet and relaxing. The cats behaved themselves and spent the day snoozing, watching the very cold world outside and expecting me to give them bits of my dinner, which I did. Last night was a bit raucous, however.

Our Christmas tree did not receive too much adverse attention over the weekend. Parker had to be spoken to rather sternly at first, but after that, he behaved himself, most of the time. Last night, though, it seemed as though everycat was hoping to be noticed. It was like Twelfth Night, with their games and misrule.

I hung bells on the lowest branches of the tree when I decorated. They are old ornaments, as are all of mine, but are of metal, rather than glass. For a couple of hours last evening, I heard bells tinkle every ten minutes.

“Cammie! What are you doing?”

Zoom. Out from under the tree and down the corridor the Princess bolted, the other cats looking at her in wonder. Then…tinkle, tinkle.

“Parker! Get away from there!”

Out comes my sturdy orange-boy, trotting along as if glad to be out of trouble he was pretending never to have been in.

At last, everycat is settling down. It’s serene. Time to have a shower, relax, read a bit with a cup of tea before bed. I re-charge the drinking-bowls with fresh water. As I am about to place the large one on the floor - zoom! - Renn shoots off the bed and, crouching low, right under the filled bowl, with no space to spare. No water spilled, but plenty sloshing about in the bowl. Sigh.

That’s all right. I don’t have to get up for another four hours. 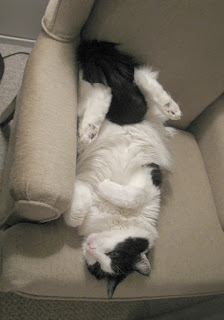 Merry Christmas to All!


Once more, Christmas Day is almost upon us. This will be my last entry until afterward, so I will wish everyone out there a happy Yuletide. May your joy and contentment start now and continue long after the last of the Twelve Days. Merry Christmas! 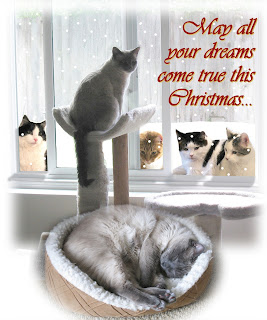 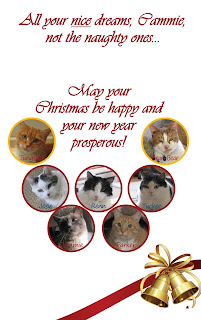 Inquiries at the Hotel

It has snowed considerably in the last two days, and I must devise a cover of some sort for the food bowl, as it is filled with snow every night. The water in its bowl takes care of itself, the snow, landing in it and melting, merely adds to the quantity.

Yesterday, before more precipitation fell, I came home from work and it was still light enough to check if any cat had gone into the new hotel outside. None had, but it may be that one had inquired at the front desk. It was difficult to tell if these were paw-prints or not, but I like to think they were, and that at least one cat has shown interest in reserving a room. 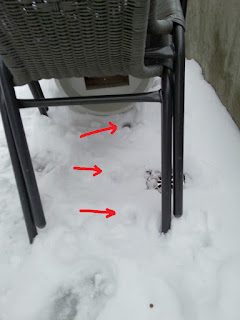 I want to thank those who commented on the new Hotel Cosy. I am currently searching for a source of straw. I have an acquaintance who may be able to procure some for me. It isn’t easy finding straw these days, despite the fact that the city in which I reside is meant to be an agricultural hub. Just a hundred years ago, I wouldn’t have had this problem, as half the vehicles in town would still have been horse-drawn. But then, I would have had more trouble finding an internet connection.

In the meantime, I would like to show you my early Christmas gift. Actually, I was given her four and a half years ago, but there always seems to be something new about her. Cammie likes to lie under the Christmas tree where it is now, especially when its lights are on. I think it’s the combination of an enclosed space (the branches above her) and the heating pipe behind her. In any case, she remains one of my favourite presents. 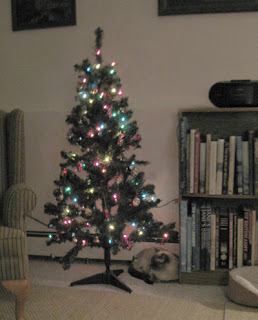 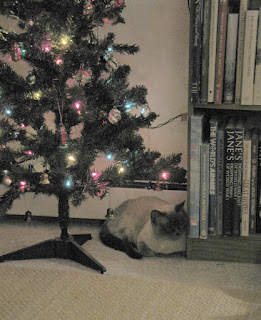 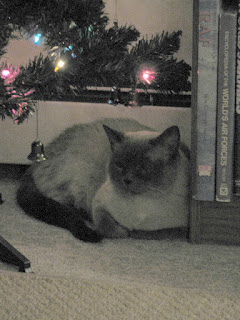