Neville is expanding his horizons daily it seems. A breakthrough came last night. It was nearly bed-time, and I was conducting some last-minute research on the computer. I heard Nev’s “Er…er…” (which is principally how he talks) preceding him into the bedroom. He paused when he saw me sitting at my desk, but came over as I held out my hand. He rubbed his face against my fingers for a minute and then, when I pushed back my chair and invited him, jumped onto my lap. From there, he made the short leap to the bed and lie down until I was finished at the computer. 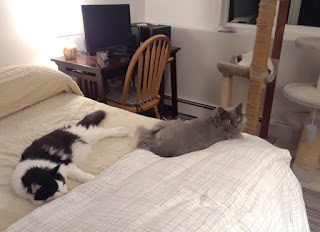 Though Nevsky left the room when I did, he came back at 4.30 the next morning. I woke to him settling down on the bed, though Renn and Tucker were already there. Unfazed by their presence or by me re-arranging myself under the covers, he remained on the bed until I had to get up an hour later.

This afternoon, he spent more time on the bed, completely unconcerned that two other cats were already there; they were equally unconcerned. 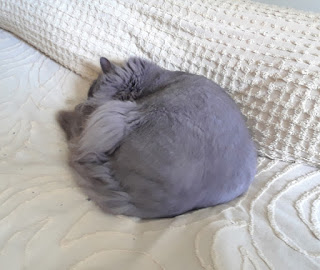 With the re-structuring of the household after the loss of Cammie and Raleigh a fortnight ago, Neville appears to be feeling much more at home. He ventures into the bedroom when I am not there and, probably, has been in there to stay for a period while I have been at work. This is very good news, of course, not just for his level of comfort and sense of belonging here, but also for his potential adoption: people are more willing to consider a cat who is unafraid of new settings and new people, even if he has to be given time. Neville has been given that time, and he seems to be making good use of it.

Wider still and wider shall thy bounds be set;
God, who made thee mighty, make thee mightier yet. 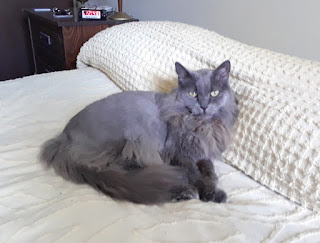 Though none of my cats is a friend to another, they do tolerate each other. Sometimes, when I see them in certain situations, I can pretend that they are pals. Josie and Renn enjoy sleeping on the bed, and quite often they will snooze there at the same time, which may be construed as snoozing together. At such times, my Chubs, who dislikes the proximity of other felines, won’t mind the big boy actually touching her, even overlapping her; she would, however, never allow it under other conditions.

In a world in which there is too much hostility, a little tolerance – no matter how little – is most welcome. 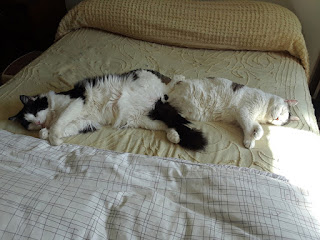 Work Had to Wait 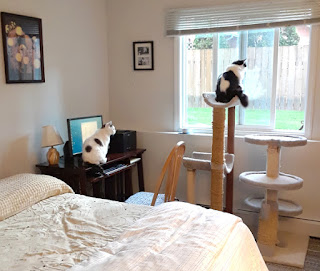 I thought I would work on my computer a little this evening. I came into the bedroom to see this. There were birds active on the lawn outside the window, and they had caught Josie and Renn’s attention. As you can guess, my work had to wait. 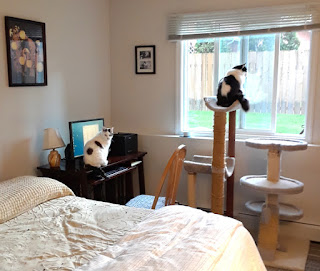 The feline dynamics of the Cosy Apartment have changed somewhat in the almost two weeks since Raleigh and Cammie died. This was to be expected, and has been, in fact commented upon by a number of this blog’s readers. But how things have changed and why have initiated some thoughts on my part.

I have noticed that Josie has become much more needy - or, perhaps, more insistent that I pay her attention. If she is awake and sees me come in to the bedroom, where she is usually lying or sitting, she makes it clear, through voice or action, that she would like some time with me. She is also more demanding, and demanding more often, that I give her some Z/D hard-food - part of Cammie’s staple diet, which Josie gets as a treat. 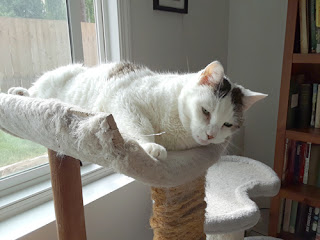 For his part, Neville is also more affectionate, in his own way. His way is finicky. There are times when he hides under a chair to avoid me interacting with him. There are other times when he lolls about on a cat-tree platform, clearly wanting me to pet him. When I do he purrs and obviously enjoys the touch.

Ruminating upon these changes in behaviour, I realised that these two were the ones most affected by the two who are gone. Though I tried to give my Chubs as much time as I could, Cammie necessarily took up a great deal of it, not just in petting (she liked to lie on my chest on the bed), but in feeding and medicating. Josie was clearly watching this and taking note of the proportion of me that my princess was receiving. Now, the Great White can demand much more of me. Further, since Cammie is not receiving Z/D, it no doubt makes sense to Josie that she should inherit her late sister’s portion.

Out in the sitting room, where the Nev is normally found, he would have seen Raleigh acquire much of my time. While I was rubbing Peachy’s fuzzy head, or his fluffy chest, I would watch Neville, who would, much of the time, be watching us. I thought then that I was encouraging the newest boy, showing him that, since Raleigh was enjoying himself, Nevsky might want to partake of some attention. It may have been the he was receiving the opposite impression: that I had little time or effort to spare for him, as I was giving it all to Raleigh. 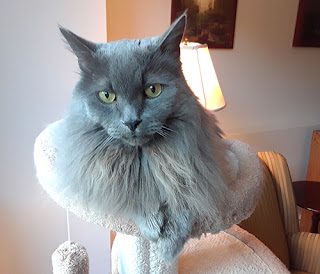 I think the changes in Neville and Josie, along with the fact that neither Tucker nor Renn seem to have altered their behaviours or attitudes much since Cammie and Raleigh departed, suggest that I may be correct. It also suggests that my cats - and cats in general - are shrewd observers, and intelligent thinkers.

It saddens me that this proves two of the beasts wanted more attention than I was giving them. Even when one tries to distribute one’s affection fairly, there will, unfortunately, be those who seem to receive more than others. It’s impossible to explain to those cats who feel left out that others are not favoured with extra affection, just extra time. To a little creature unable to comprehend completely, though, time and affection are, regrettably, often the same thing.

One of the results of losing two of my beasts at once is that I observe all the more closely my remaining cats for signs of trouble. I have done this all the time, of course, as almost every cat-owner does: I note the size and consistency of waste left in the litter-boxes, the amount the cats eat, and how often they want to; I pay attention to the desire to play or the level of activity, and I watch their moods.

But two dying on the same day has made me particularly vigilant, perhaps too much so. I see that Neville has a belly that is growing round, and I think of Raleigh’s FIP. (Neville’s belly has been growing for some time, and his appetite is a healthy one, if you know what I mean…) I see that Tucker is off his food in the morning, and I think his diabetes is overwhelming him. (Tucker rarely feels like eating in the morning; his habits are peculiar…) Wariness is good, paranoia is not.

Something that will lead to difficulties eventually is age. I see it in all my cats from time to time, but most so in Josie. To be honest, she strikes me as being in very good shape for a sixteen year old. She is reasonably active (the reason in this case being Cammie’s old Z/D hard-food, which my Chubs loves, and receives as a treat), she is alert, when she thinks there is need to be, and she is eating and drinking satisfactorily. She even jumps from the bed to the cat-tree by the window now and then.

But she is slowing down. One of her favourite spots is the saddle in the saddle-topped cat-tree in the bedroom, the cat-tree that came with Cammie when she was first rescued. To get down from there, Josie usually drops to the ledge that runs under the window. Her drop is much more careful these days, more cautious. She makes full use of both sets of stairs up to the bed, the smaller set at the foot and the larger set at the side, originally provided for the princess.

The quality I have noticed diminishing most with the Great White’s years is her hearing. I have mentioned this once before in the blog, but it seems to be decreasing further. As functions go, it is probably one of the least needed by a safe, indoor cat, so I am not overly worried about its effects. Unlike blindness, though, I cannot avert startling a deaf cat by announcing my approach. If Josie’s head is turned away from me as I walk toward her, I try to make a wide arc around her, to allow her to notice me in good time; nonetheless, I always seem to materialise suddenly, and she jumps slightly. And, like a person who is hard of hearing, she must have certain words repeated to her, such as “dinner” or “snack.” Yet she hears the crinkle of a lone treat-kernel from across the room…

As I wrote, Josie is doing well (knock on wood) and I see no reason for her not to continue so. I will keep my eye on her and all she does, but she appears to be enjoying a gentle and graceful retirement. Well, as graceful as it can be when it is punctuated by rusty croaks and creaking cries for treats… 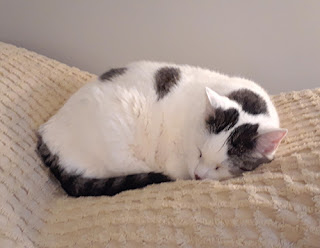 I noticed something just recently about Tucker’s fur. In February of this year, he was given a temporary implant, a new device by which his blood-glucose values could be constantly and easily read. This involved shaving off a small patch of his fur in which to place the device. Afterward, the fur of course grew back.

But this week, I saw that the fur now there is a different colour and pattern than his surface fur elsewhere. This is what it looks like on his right flank, where the implant had been, so far as it can be interpreted by my limited photographic skills. You will note in the midst of the darker tabby markings, there is an almost blond colour streaked for some vertical length. 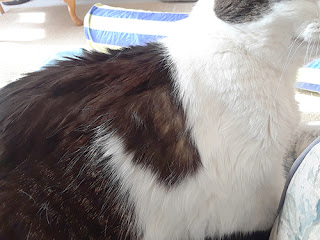 I looked at his opposite flank and observed that there is a similar sort of colour, but it is under the darker fur. On the unshaved side, in other words, it is under-fur (I have had to brush back the top-coat); on the once-shaved side, it is surface fur. 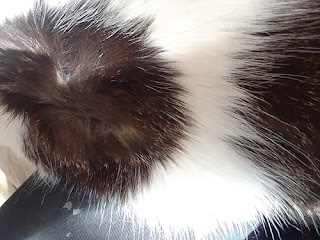 This is neither good nor bad, but I found it interesting that the removal of fur could result in a change of colour and pattern, when the fur re-grows. I was thinking of shaving off all of the roly poly’s fur. It might be impressive having him look like this for the next little while… 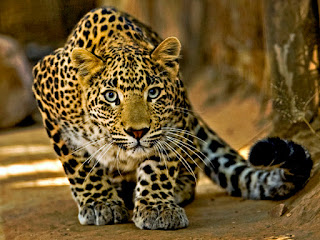