Into the New Year

The new year has begun. Everyone here at the house finished the old year in good spirits. Christmas is being (present tense, as we’ve not finished the Twelve Days yet) kind to us, bringing gifts, food and tranquility (the latter being as important as anything, in a household with four animals). The cats received many presents (more than I did, in fact!), toys that they enjoy playing with, whether with me or by themselves. 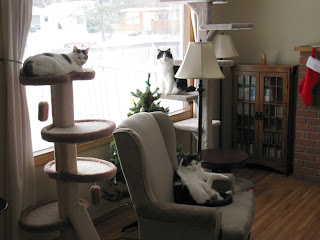 Not everyone has entered the new year in good health, however. Tucker is scheduled for a dental operation on 7th January. He has some teeth which must be removed; the rest need cleaning. The veterinarian explained that his bad teeth may have been hurting him for some time. Cats do not show pain readily – though the slighter forms of discomfort certainly bring out protests fast enough. Tucker has never been reticent about eating, whether soft food or hard; I hope that’s a sign that he has not been bothered too much by his teeth.
He will go for his operation early in the morning and return to the house in the late afternoon. I’m not sure what to expect. The first time Tungsten had to have a tooth removed, she came back rather stunned, and sat on her food mat for the rest of the day. She had trouble chewing hard food and I felt bad at how frustrated she would become trying. But at last she found an alternative place in her mouth to crunch the kernels, and she recovered well. The second time she went, she behaved as if she had gone for nothing more than an exam, despite having had another tooth removed. She chewed her hard food that same night, with apparently no difficulty. 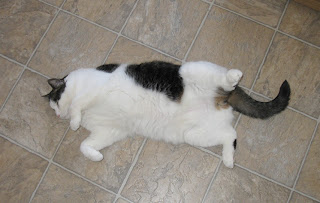 Tucker was very despondent when he first came to stay with me, and I always worry that that reaction may repeat itself after a tramautic time. However, he, and the other cats, survived the move to the new house with no bother at all, and when he comes back from the surgery, he will be returning to a familiar setting, which I believe he likes, and to familiar roommates. I hope that those factors make all the difference. Even so, he will be sore, possibly ill from the anaesthetic and probably just plain out of sorts. A contrast with Tungsten that will aid his recovery, though, is that Tungsten’s taste for soft food is mild. She eats it, but rarely consumes everything in her dish. Tucker would suck back tins of the stuff at a sitting, if allowed. I don’t fear that he will starve. Tucker would gladly forego hard food for more of the soft.
Tucker’s arrival in my household was one of the changes that occurred last year. In fact, Ren’s arrival counts, too. I find it hard to credit that he’s been with me only since May. Perhaps Tucker’s advent at the end of September made the big boy seem like an old part of my life. Speaking of Ren, he continues his fascination with water, whether it’s still or running. I wish he could tell me what interests him about it so much. 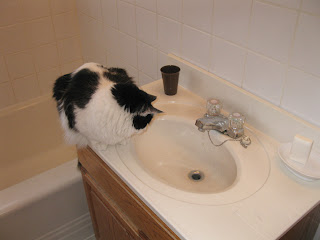 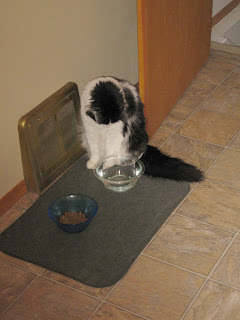 Other new aspects of the cats’ lives include Josie’s growing friendship with me. She has always been a friendly cat. It’s why I chose her to be a companion for Tungsten. My Chubs couldn’t help it if the orange one didn’t like it that way. But over the past few months, even before we moved to the house, Josie has been asking me for attention more often, seeking me out and trying to be near me. Just this week, she twice jumped up on the table where I was writing and lie down across my papers. She had not done that before. Naturally, I obliged with petting for as long as she liked. 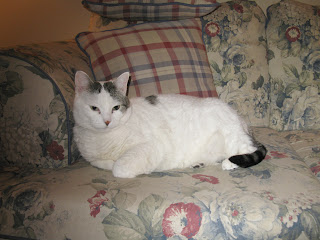 I’ve also noted that though Tungsten is the undisputed top-cat here, even she will yield the food bowl to Josie when the latter comes for a nibble. There’s no fighting; Tungsten understands the situation. But I’ve seen my Chubs swat Tucker – with not too much force – away from the food. It was similar with the foster-cats, Wixie and Mystery. The latter was the dominant cat in that pair, yet recognised that Wixie would not be denied when it came to food. 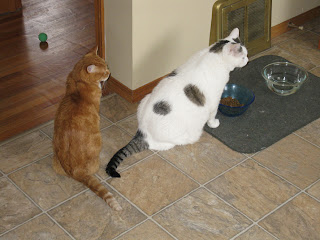 Tungsten has found a new spot to lie in, a hide-away in a bathroom cabinet to which only her small size admits her. As well, she has found an old spot for comfort. I at last put cushions back on the dining chairs. She has always enjoyed curling up on them for a snooze, and didn’t take long to find that they were back. 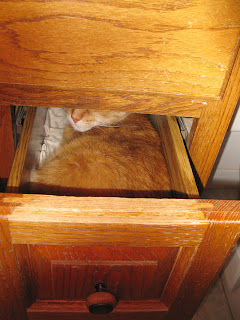 With regards to the cats, what I am most thankful for in the new year is that they get along so well. There are sometimes growls from Josie (she sounds like a grumpy old lady) when Tucker wants to play and she doesn’t; the new boy will pursue her too closely. And once in a while, Tungsten will hiss, especially at Ren. But that’s because most of the time, she allows Ren to come near her, even to lie next to her. Now and then, though, Tungsten wants to be alone. But the facts that she and Ren snooze beside each other, and that Josie and Tucker will play chase together, are remarkable. It’s a marvel to see the four of them go for days without a harsh action among them. 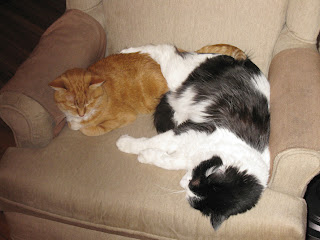 Josie came to live with me two years ago on Christmas Eve, and at the time I thought Tungsten would never like her or another cat. But if my orange one can change for the better, and can learn to tolerate others, then anyone can.
Posted by John Bellen at 6:33 AM