Right now, of all my cats, the one who has changed the most is Renn. Aside from the fact that his name used to be spelled with only one ‘n’ (I’ve no idea why I changed that), he has become friendlier, more confident and has shown his personality more than ever before. 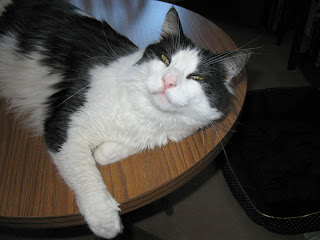 He’s my big boy, Renfrew Foster, as he once was; I adopted him some time ago. He provides me with a smile every time I see him. He tried something different last week. Tungsten was sitting on the floor at the end of the bed. Renn was on the floor beside the bed, around the corner as it were from the orange one, and obscured by the long skirt of the bedspread. Peeking under it, the big boy saw Tungsten, and decided to sneak up on her. As far as I know, he’s never attempted this; it was a new game for him. He crawled beneath the box-spring, just hidden by the bedspread which brushed the floor at the bed’s foot. Unfortunately, perhaps because stalking another cat was a novelty to Renn, his large form was easily traced as it bulged the bedspread out. This big, long lump crept slowly up on Tungsten, who was watching Renn’s progress with the most bored expression. At one point, Renn’s long fur even stuck out into view. Eventually, he stopped, inches from the orange one but on the other side of the bedspread. He didn’t move. He didn’t know what to do next. This torpor continued for a couple of minutes until Tungsten grew tired of it and left. Renn crawled out, a little abashed, half a minute later, perhaps regretting his missed chance. There will be others. 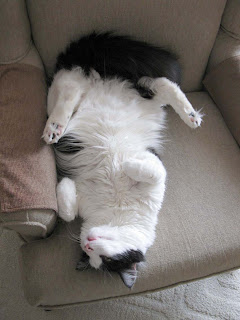 As I think I’ve mentioned, Renn is developing into a lap-cat. He doesn’t have the nerve to jump onto my lap, but I can tell when he wants up. His back arches for attention and his body seems to wag, almost as much as a dog wags his tail. I will hoist him up, after which he will purr in his rough way as I stroke and pet him. Then he will grow quiet and just lie on me for twenty or thirty minutes. This leads to some chagrin on Tungsten’s part, as the orange one sees my lap as her prerogative. One evening, after Renn jumped down, he landed near Tungsten, who had been waiting, a little impatiently, for a vacancy. Usually, Tungsten and Renn get along well. This time, the tiny terror, annoyed at her big roommate, started slapping him, driving him into a corner. Renn blinked and cowered under the onslaught, but didn’t fight back; he knows who the top-cat is. He had no recourse but to back away, literally.
Renn is not a fighter, though he will reach a breaking point. I can tell he becomes annoyed when I must cut his claws. He dislikes the operation, and I must talk to him and calm him when he groans and whines. Tucker is his superior in the hierarchy of cats at my house, and will boss him around sometimes. Once, evidently, was too much, as the pair got into a real whirling, smacking, wrestling match. It lasted only a few seconds, as they broke apart when I yelled at them, but there were tufts of hair all over the floor. They were Renn’s; I think the roly-poly one had the better of him. Renn’s not a fighter.
He is timid, and hides when visitors come, or when he hears someone just outside the house. But he’s getting better, hiding less and coming out sooner, even when there are strangers about. After meeting these strangers, he probably wonders what he was so apprehensive about. 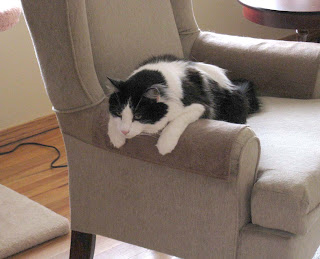 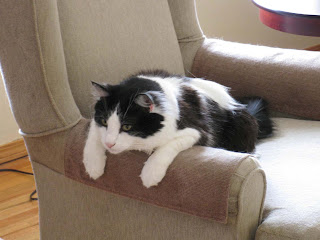 My big boy enjoys playing. He likes a string toy or a stick, something he can grab. Often, when the string toy is flying about, he will, too. He will leap into the air, a foot, even two, off the floor, in order to catch the object. He comes down rather heavily - cats need a certain distance in which to twist in order to land on their feet, I’ve learned - so I usually entice him to jump only when we play the game on the bed (with a more claw-resistent duvet covering the fragile bedspread). He will also chase and be chased by Tucker and, to a lesser extent, Josie. Sometimes, he will play by himself, knocking about a ball or a fuzzy mouse; he will run about, just for fun. A few days ago, he raced about the house and stopped only when he collided with the water-bowl and sent its contents splashing.
Ah, water. The abiding mystery in Renn’s life. He will watch its flow, its ebb, its stillness; the way it ripples, the way it drops. There is something endlessly fascinating about water for my big boy. He will stare at the bowl from which the cats drink. He will climb up onto the counter next the basin in the bathroom and stare at a tap that hasn’t even dripped, because he knows it may. He will tap water’s surface, to test its texture. Falling water has the allure of a living animal for Renn: his ears turn straight ahead, his eyes grow large, his movements become jerky and attentive. What is this attraction? He drinks water, so he knows what it is, yet its qualities are to him what the stars were to a Renaissance astronomer. Renn, my scientist. 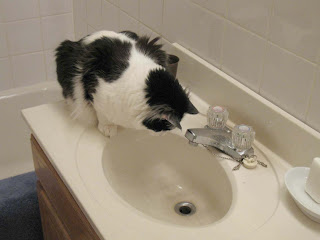 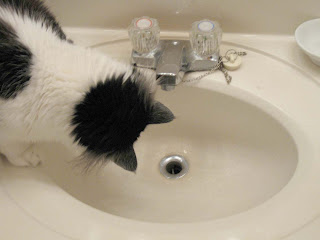 And now, with the coming of spring, a new excitement is arriving. Birds were rarely seen near the apartment where we previously lived. All that could be viewed from it was concrete and brick, stone and asphalt. There were trees by the building, but birds didn’t seem to frequent them, nor were they attracted by a feeder with seed that I had hung up in an attempt to provide a show for the cats. But the back lawn of the house has trees and bushes, grass and power-lines, and still more trees and cables are beyond it; birds congregate and fly within eyesight. Renn has observed them. He’s watched people and dogs out the front windows of the house, and still more birds. Further mysteries to ponder. 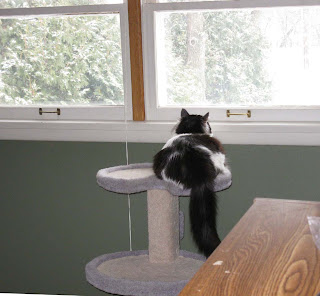 Renn is a cat of many parts. He is gentle and shy, but can be roused to anger by prolonged annoyance. He learns and adapts to challenges, but can continue to be perplexed by the simplest of riddles. He is large but eats sparingly. He is active but enjoys most a quiet evening of chest-rubbing or even silence and stillness. He’s my big boy. 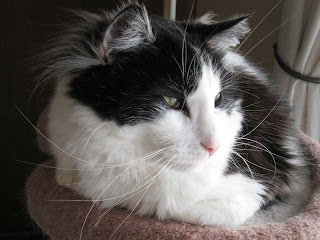