There are plenty of cat-toys in the house. My three (plus one) have their choices of fuzzy mice, spongy balls, furry balls (rather disgusting now with the fuzz and fur pulled and torn and covered with dried cat spit), mice on a string (which used to be mice hanging from a string but Renn discovered that he could get the mice by chewing through the string and letting it drop; unfortunately, it wasn’t as much fun after that) and little plastic coils that everyone says their cats love but mine largely ignore.
Tucker likes playing with these toys, and Renn does as well, though not to the extent that the roly poly one does. Josie and Tungsten (when the latter plays at all) prefer to wait until I bring out the human-operated feather-sticks and string-toys.
Even so, I think you can see that there are toys aplenty with which the cats may amuse themselves. But some are more enterprising, and find their own sources of amusement. These are simple, cheap alternatives, rather along the lines of a child playing with the box in which a toy comes, rather than the contents themselves.
Tucker likes to play with his food. He will take a kernel of the hard food, scooping it out of the bowl, and knock it about on the floor, chasing it. The little kibble certainly does fly about, gliding over the smooth surface of hardwood and tumbling about the linoleum. 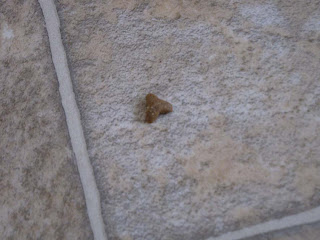 This is harmless fun, for the most part. Often, when Tucker has had his fill of play, he will have his fill of food, and eat his toy. But this isn’t always the case. I’ve found numerous intact kernels lying about the floor, even more frequently lying under furniture. And I’ve stepped on others. I tell the cats not to leave their toys lying about - I can no longer count the number of times I’ve stepped on a fuzzy mouse and been afraid I’ve come down on a paw or a tail - but it’s fruitless. And so, once in a while, I feel something small and hard giving way under my heel, and hear a crunch. 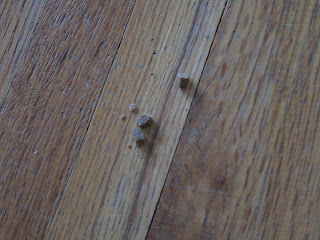 One day, a couple of weeks ago, I came home and found that the cats had discovered a new diversion. This one may have been devised by Tucker, since he is most likely to play with small, rubbery items. But I think Renn had a hand in it. The roly poly one rarely goes into the bathroom except to rub up against me. My big boy enjoys going into the bathroom to watch the water evaporate in the basin or, if he’s lucky and I haven’t fully turned off the tap, to watch the water drip. It’s more probable that it was he who found the new toy on the rim of the bath-tub. If it hadn’t been lying in the middle of the kitchen’s floor, easily seen, I may have had to forego bathing. 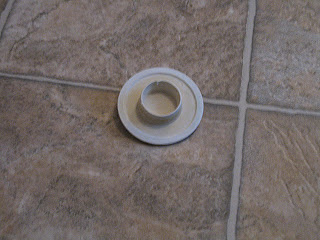