Last night, I was cleaning out the litter-boxes, as I usually do before bed. Some people drink warm milk, some read, others listen to music. I scoop unmentionable crap from big plastic boxes filled with desiccated corn chips. I’d like to claim it as a long-standing family tradition, handed down through the generations. It’s not.

Anyway, some of the beasts will wet against the inside walls of the box, so I press the scoop against the wall to free the resultant clump. Usually, the worst that happens is that the clump breaks apart. This time, the scoop broke apart. It didn’t just break; it snap and sent a shower of used litter all over the storeroom. These things, like Tucker getting into the old house’s fireplace, or Josie throwing up, tend to occur just after I shower and just before I go to bed. Timing is everything. 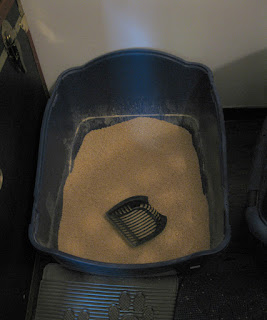 The picture was taken once the crime-scene was cleaned up. After all, the bowl of the scoop was still operable. Unfortunately, it’s as close to using my hands as I’ve yet come, and closer than I wanted to. I determine to buy a new scoop the next day.

I was already planning to go to the local Dollarama, so I decided to buy a scoop there. The Dollarama is the twenty-first century’s version of the old Five-and-Dime Stores – for those of us who are old enough to recall them – or the old Woolworth’s – for those of us in Canada or Britain. The new scoop was cheap but serviceable. It was, in fact, almost identical, but for colour, to the old one.

It snapped in two the first time I used it. I recall a rake that did the same thing: the handle shattered within seconds of applying the tool to leaves. The difference is that leaves feel much less unhygienic to the touch than does the product one must scoop. This photograph I took immediately subsequent to the incident. I think I wanted proof that it had transpired yet again. 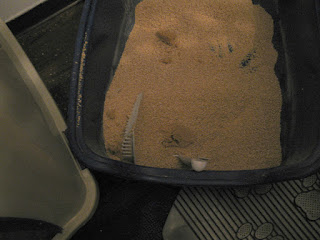 I was not fooling around this time. I went to the pet-supply shop where I buy cat-food and litter and bought a heavy-duty scoop. Steel bowl, titanium handle, with battery-powered solid-fuel thrusters for propulsion and gyroscopic stabilizers to maintain equilibrium, and micro-chip relays to satellites in geo-synchronous orbit for topographically accurate guidance. All right, it was thicker plastic than the previous two. And it stayed in one piece.

I will buy another, cheap scoop as a reserve, but I don’t anticipate the current one breaking any time soon. But if it does, no one gets to use the litter-boxes until I buy a replacement. 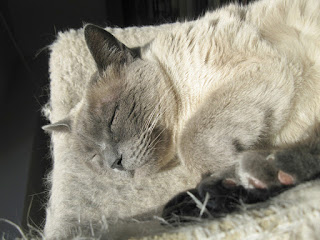