I will be checking on little Esau every week until he is weaned and brought into a foster-home; I don’t want to be a daily pest to his foster-guardians, as much as I would like to know his progress.

In the meantime, I have been thinking about the kittens from this weekend. With so many little ones being born, more cats is not really what we need. And yet, how can we let such lives end? Neutering and spaying are good; they keep new kittens from being conceived. But once they are in the world, they often become a matter of rescue. I don’t think I could sit by and let an animal die needlessly. If a cat were slowly dying and in distress, euthanasia would be a mercy. But if, with a little effort - or a great deal of effort - an animal could be brought back from the edge of death, then I would make that effort.

Besides, each kitten is an individual cat in the making, a beast with a personality all its own, and a great capacity for love. Esau may grow up to be adopted by a lonely person whose life would bloom with his company. Or he may go to a large family with many pets already, and live a fun and frenetic existence with a dozen siblings. I was struck by the little one’s resemblance to one of my cats - well, at least the resemblance of his fur-pattern; at his current age, Esau looks less like a cat than a completely different genus. But he may have been close to what my Renn looked like when a newborn, and I can’t imagine not having my gentle big boy around to lope confidently onto the bed at night-time, or tentatively reach out his paw to beg my attention when I am reading.

If Esau brings someone the happiness Renn and his siblings have brought me, that person will be lucky. And there is the simple fact that his is a life that should be filled with peace and contentment. He deserves it as much as we do. That’s why Esau needed saving, and why the loss of his brothers or sisters is such a sorrow. Life isn’t just a beating heart or breathing lungs. It is all the person or animal does while his heart beats and his lungs breathe. And it’s worth that little - or great deal of - effort. 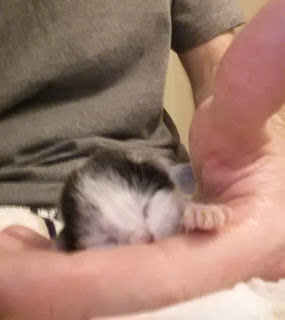 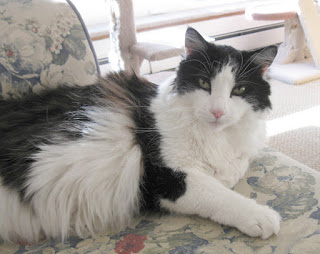