Before anything else, I would like to thank all those who have sent their condolences on my recent losses. Many are people who have not commented on my blog before, which is very gratifying; even if they don’t read my blog, or read it regularly, to take the time to express their feelings of sympathy is generous. Those who do read my blog know how much the cats are a part of my life, and know what the departure of Cammie and Raleigh  mean. But then, almost everyone who has or has had a pet realises what a death does, so I need not go on about it in general.

I will be thanking each respondent in the comments section of the post in which they wrote; it may take time, but I think it is both necessary and right, and it is my pleasure.

Though it is invidious to thank any one person more than others, I must record my gratitude to Ann of Zoolatry, who has created beautiful remembrance badges for my two. There are many in the Cat Blogosphere who have benefitted from her artistry and generosity; I have in the past, and I have again, so I thank her.

Almost everyone has experienced a death in the family, so describing the effects here, in general, are unnecessary. But each person and animal is different, each has his or her own personality. That seems particularly true of cats, and Cammie and Raleigh’s personalities made a big difference here in the Cosy Apartment. I will write about each individually later, but for now, let me simply state that things feel strange here.

In terms of medication alone, I am sometimes at a loss as to what I should be doing, because I feel I should be doing something I’m not. Cammie had blood-pressure medicine rubbed into her ears twice a day, her kidney-ailment Simentra once a day, and, lately, her fluids once a week. Raleigh had his Prednisolone hidden in his food twice a day, an appetite-stimulator every three days, a laxative every couple of days and, not so long ago, an anti-biotic. None of that needs doing now. Now, I give insulin to Tucker and Neville twice a day. It’s no wonder I felt that I overlooked something this morning.

Raleigh and Cammie were high-maintenance. I will describe a morning’s routine with Cammie. While preparing others’ breakfasts, I dished out my princess’s. She ate the tinned Z/D, horrible, sticky stuff, to which I added several drops of water, then heated in the micro-wave oven. This I placed before her in the bedroom. She would eat some but usually not all the serving at this time. Then she would wander about, and I had to watch that she did not stumble onto another cat’s food while that one was eating, and help herself, even to a morsel. That would cause her allergies to flare up and be potentially disastrous. Nor did I want to shoe her back into the bedroom; I felt that chastising a blind cat for exploring was restrictive; besides, she just wanted to discover what was new that day.

Then, after the others were fed – coaxing Raleigh to eat recently was a chore in itself – I would hurry to make the bed. Cammie liked next to lie on the bed, though would not if it were not made. But she would keep trying, climbing the stairs if they were there (I had to move them to make the bed) and turning away again upon discovering that the bed was not made. She would repeat the trek around the bed from her own cat-bed a dozen times while I pulled up the blanket and smoothed the bedspread. I would tell her, “Not yet, Cammie, wait, wait,” and she would turn and walk back, only to turn again before she had gone a couple of feet. Eventually, I would thump the top stair; this signaled  that the bed was made, and she could lie on it at last. Then I would serve her more food; this was when she ate most, especially if she were hungry and wanted several servings. I would also rub her blood-pressure medicine into her ears.

I would have placed a litter-box and soaker-pad in the bedroom by then. She was sequestered each day to give her freedom from the stress of others blundering about her dark world while I was at work. She received her own litter-box, but I found that if I placed it early, she would actually use it, rather than wetting on the soaker-pad. But then I would need to scoop it, along with the other boxes. I would have re-charged her water-bowl first thing upon waking, as Cammie liked a long draught of water before anything else, so I would fill it again before I left for work. After placing her hard-food bowl on the floor, I would say ‘good-bye’ to her, and leave her for the day.

Raleigh’s routine was simpler: after his FIP started stealing his appetite, I had to offer him a variety of food to tempt him to eat (consuming his Prednisolone with it). If he didn’t eat, I would have to force the pill into him – simple, but not easy or pleasant. That would involve catching him, though he didn’t have the energy to run as he neared his end. But Raleigh had begun wetting on the store-room floor in front of the litter-boxes. This was not due to anything physical but was in imitation of Josie’s much more random instances of sticking her bum out the front of the box. Even so, it usually meant washing the floor. Accidents will still happen, I am sure, but much more rarely.

I don’t know if all the time spent doing this in the past will be saved from now on. Cat-work tends to be like a gas in a jar: it fills whatever time one has.

But there are other, subtler adjustments I will need to make. Feeding only four, instead of six, makes me think two are missing (which they are). I count ‘six’ in the mornings when I leave, to make certain  everyone is present. I am sure I will fear I’ve lost someone in the weeks to come (which I have). Checking at odd hours to see if Cammie is hungry will no longer be necessary, and spending five or ten minutes after each snack-time to rub Raleigh’s chest won’t happen. The sound of someone wretching would send me running to see if it was Cammie beginning one of her episodes, while I no longer need the pharmacy’s number catalogued in my telephone for calling and ordering medicine.

The worst adjustment, however, is simply not having Cammie and Raleigh here, knowing that I will never have my princess lying on my chest and purring as I pet her, or Raleigh slowly, warily, making his way toward my out-stretched fist for a head-rubbing. They are gone, and my world is very different. The truth is that the biggest adjustment I must make is reconciling myself to the fact that, despite the joyful presence of these wonderful four below, the world is simply not as good as it once was. 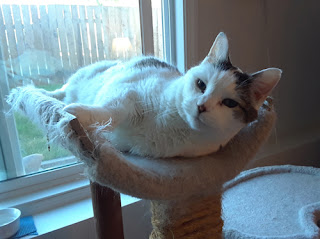 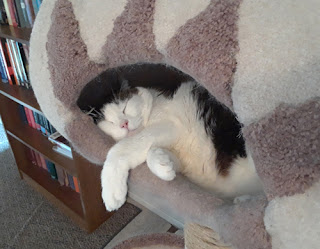 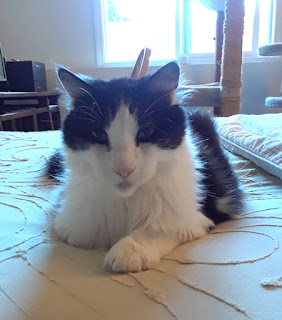 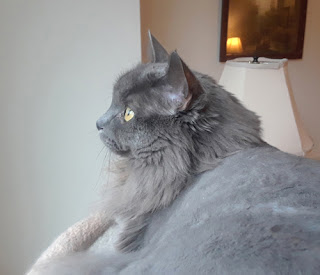