Raleigh in the Morning

Raleigh is not faring well. His appetite has diminished further, and he seems interested in eating only the Z/D tinned food that I give to Cammie. Even with that, it was a chore to coax him to eat this morning; I had to lift him out of the cat-bed from which he wouldn’t move of his own accord. Aside from the obvious reason for eating, it is the means by which he consumes his Prednisolone, which treats his stomatitis, and which he cannot cease taking without being weaned. (And if he doesn’t take it, his mouth becomes very painful, giving more disincentive to eat.)

That the Z/D is enough to keep Peachy going is evident from Cammie, but I don’t think that, nutritionally, it is a good food. Besides that, however, is my concern that, having gone off every other food, it may be a matter of time before he no longer cares for the Z/D. Then it will come down to force-feeding him.

This decrease in appetite comes despite the on-going treatment with Mirtazapin, to stimulate his desire to eat. He is also receiving anti-biotic for any possible infection. This began because Raleigh showed symptoms of a respiratory problem. He doesn’t seem to have that any more, though I will continue the dosage for the prescribed time. Then I will treat him with Lysine, as suggested by several readers, and approved by the veterinary.

But I fear that what is troubling my Peach isn’t going to be resolved with anti-biotic or simple amino acids. I will be speaking with his doctor again this week. 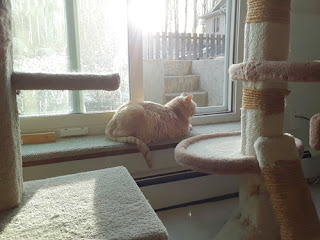