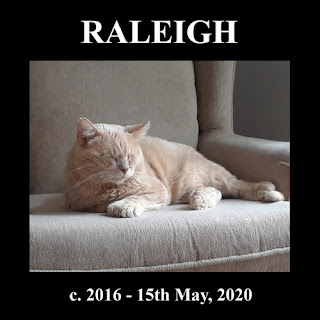 When I came home yesterday, I saw that his breathing was ragged; I think he was in considerable discomfort. I gave him some Gabapentin, and an hour or so later, he seemed to be feeling better. But I knew that the pain-killer was only a very temporary relief. There was no point to delaying what needed to happen, as he was not going to get better. He might have a good evening, or a meal that he enjoyed, but those would be exceptions to the new rule.

The Trout Towne Tabbies asked Saint Francis to stay with Peachy, and I think he must have: my boy didn’t seem as scared at the hospital this time. He stayed in his carrier - the top was removed - and his spirit shed his body quickly; just the slightest anxiety when the drug entered his system, and then it was over. My ugly spaniel died a most beautiful boy. 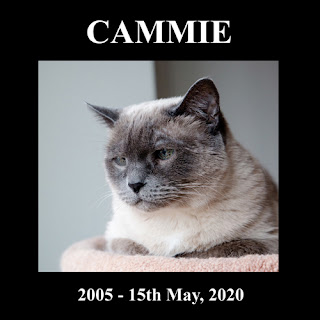 Cammie died at 3.47 this afternoon.

This morning, there was no improvement following last night’s stroke, as there had been a few hours after her first stroke last year. She continued to walk in circles, and her right rear leg was almost completely lame. She ate some food, but I had to have it touch her mouth; I don’t think she could smell. Despite knowing where the litter-boxes were, she pooped on the rug near by. Also, she ate favouring one side of her mouth, and with her head tilted. I thought it would be cruel to let her continue like that for even another day. There would be no getting better; only confusion and frustration at best, pain and fear at worst.

My princess was uncharacteristically coöperative at the hospital; probably a sign of her deterioration. The Cammie of a month ago would not have put up with such probing and poking. She died swiftly and without pain.

Because of how they came to live with me, Raleigh and Cammie were cared for by different veterinary hospitals. We couldn’t have received more consideration from either institution. I was able to be with my friends when they died. They were horrible experiences, but I wouldn’t have been anywhere else.
Posted by John Bellen at 4:55 PM