I have a non-fiction book called The Crowded Hours, about a man’s adventurous life in peace and war. When one has cats, one need not enlist in a foreign army and fight in exotic lands to experience diverse and strange events.

Friday evening, I was watching Raleigh. He has been feeling under the weather, for which I have been giving him Mirtazapine, to stimulate his appetite, and Restoralax, to stimulate his bowels; a form of burning the candle at both ends, as it were. Peachy had been constipated a few days before, so I was keeping an eye on his litter-box visits. This time, he came out of the store-room, where the boxes are kept, not having scraped or battered at the interior walls of a litter-box, his habit after having done what nature requires of him. Something was amiss. I was certain of this when he lie down just outside the storeroom, and then lifted his leg several times, as if to clean his bum, but without actually doing so. 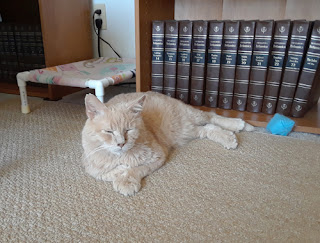 It turned out that he had not completed his duty. That is to say, it hadn’t finished its extrusion. Well, well. Picking Raleigh up, I took him to the bathroom, where I had to use a few strong-arm tactics to persuade the recalcitrant little wastrel to make its full appearance. This elicited some cries of dismay from the Peach, but more, I fancy, in alarm than pain. Oddly, the product was not hard, only firm. Why it stranded itself in mid-voyage, I can’t say.

Whatever the cause, I was able to cast away the problems and leave Raleigh surprisingly clean. Afterward, he suffered no ill effects, and today completed the transaction properly. He continues to receive Restoralax, both to soften the business and ease the path.

Josie, on the other hand, had a problem with the opposite end. She threw up her dinner. This happens with her sometimes, depending on how fast and how much she eats. She alerted me to the situation with her usual ‘wah wah wah’ cries. When I reached the bedroom, where she had been lying, she was already stepping down from the bed, on her way to the bathroom. After several years of me carrying or shepherding her to that uncarpeted floor, my Chubs attempts to get there on her own whenever she feels the biliousness come upon her. (I also have cardboard cartons and box lids to slip under her mouth if I have time.) 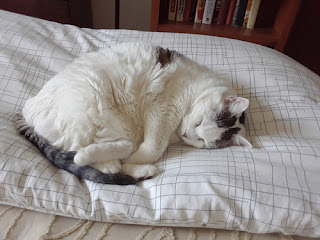 The Great White regurgitated a suitable amount thrice, which is her normal number of efforts, then returned to the bedroom for a drink of water and another lie-down. I had to run errands, satisfied that Josie was recovering. I was wrong. When I came home, I noted that she had chucked the up twice more – on the bathroom floor. She must have felt the urge come upon her and hurried to where she knew she should go.

So, while it was a busy and perhaps regrettable evening, it was not unadulteratedly bad, and the two subjects of this little essay did their coöperative best to ease both their troubles and my work. I could have done without such actions, but, as one realises as one ages, things could have been far worse. I – and the cats – had a good sleep that night.

Oh, and Renn urinated in the bath-tub. 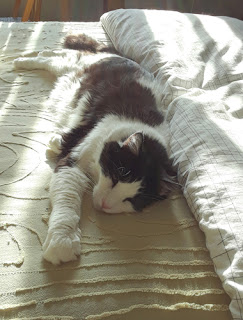