Today, Raleigh went to the doctor again, as he was not improving. My Peach has FIP. There is no cure, and almost as little treatment. The veterinary said that expecting Raleigh to live without great discomfort for another month is “optimistic”.

I knew the anti-biotic he was taking was not helping, and I saw Raleigh’s sides become bloated. I feared the accumulation of fluid that came with FIP. X-rays were taken; a tap of his abdomen produced a quantity of yellowish liquid. Though much was drained, it will simply build up again. Raleigh’s breathing is fast, a symptom of the pressure on his diaphragm; his loss of appetite is another characteristic of FIP.

Though he could outlast the prediction, FIP is not cancer. It is less unpredictable; Parker strode confidently past the date given for his demise, and kept going for four months. Raleigh will probably not survive long. Given his apathy toward food, I suspect it will be that that will determine the number of his remaining days. Sometimes, he will eat a sustaining amount; sometimes, especially in the mornings, he will want nothing. I won’t force-feed him anything. His inappetence isn’t temporary, and won’t be shocked into starting again, or resume after he has been carried over by nutrition delivered in a syringe. I will still give him his Prednisolone, as failure to ingest that will cause difficulties swiftly, possibly more swiftly than the FIP will claim him.

He has not been with me for two years, this ugly little spaniel whom I thought was ancient when I first observed him. It has been a short time, far too short a time. But hopefully he will feel that it has been a good time. I know I will always be grateful to have the Peach as a member of my family. 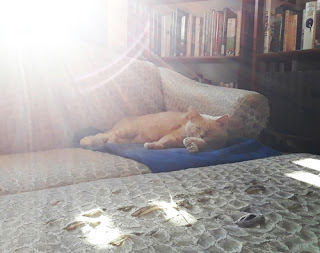