Do You Feel a Draught?

Very often, one action has an effect unimagined or unintended. We can take as an example Neville’s recent shave.

Nevsky had the upper half of his body shaved to the skin. I won’t again go into the question of why the veterinary hospital did not shave all of him, or trim the hair on his lower half a bit. Instead, I will point out that my foster-cat probably feels the air to be a bit cooler now than he had before. He till lazes on top of the tallest cat-tree, or lies next to it on top of the lower cat-tree in the sitting room, even when the door to the ditch is open to its screen. But sometimes I think the exposure is a bit chilly for him.

He therefore has taken to lying in the sitting room’s cat-beds. He enjoys the deep cushion and high sides of the newer, unheated bed, as grey as he is, and he likes the heated though rather more aged cat-bed nearer the kitchen. I’m sure they provide the warmth that he finds is lacking right now, even as the temperature of each day seems to rise farther than the previous.

Neville hadn’t been much of one for cat-beds prior to this. Even when his hair had been cropped short, he preferred the unsheltered though comfortable spots, such as carpeted floors and couches. I imagine the shave he received a few weeks ago has had more of an effect than his former, uneven crop. I wonder, though, if he will continue to favour the cat-beds once his hair returns. Naturally, it is a long, full coat that he wears. That, in a cat-bed, might be too warm for him, and return him to his earlier apathy toward beds. Or will he, once the comfort of a snug bed has been discovered, prefer to use them still, even if only irregularly?

I like that the cats who live with me have choices. They don’t have many, being insider-cats, but I think it’s important to give them variety, especially in terms of comfort. And I quite like seeing my newest resident taking advantage of that choice. 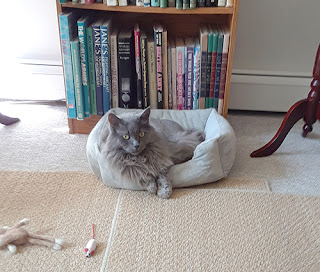