Before anything else, I want to thank all those who have described their sympathy and sorrow at the passing of my two friends, Cammie and Raleigh. They were very special to me, and it seems that they were to many others, too. Raleigh especially seems to have touched a lot of people. Cammie had great afflictions but she had the strength and determination to overcome them; she lived fifteen years, half of that time with me. I will miss her in ways I can’t describe. But Raleigh lived a short time, most of it probably unappreciated and certainly some of it alone and very scared. His time with me was a mere twenty-one months, much of it in uncertainty of his new home. But this frightened little fellow found a spot with many of those who read of his adventures, as he did with me.

I have tried to express my gratitude individually to each correspondent who commented on my losses, principally through a response to those comments. I apologise if I have inadvertently missed someone. On behalf of both my departed cats, thank you.

But even in sorrow, there can be delight. My surviving beasts bring me the latter emotion. This time, it was Neville’s turn.

When he came to stay with me temporarily, in August of last year, Nevsky didn’t mind lying on my lap now and then. That changed when he came to live here permanently. He may have realised the changed status, and that affected his behaviour. He was less affectionate with me in the long run than in the short-term, opposite of the usual effect.

But that is changing. Over the last few weeks, I noticed him purring more often, and more audibly, responding to being petted and stroked. Then, last evening, after snack-time, he was relaxing on the couch in the sitting room. I sat down near him and patted my lap. I didn’t think anything would come of it. The Nev stood up, stretched, and walked over to me, climbing onto my lap. There he stayed for about ten minutes.

He switched positions numerous times, as if he couldn’t get comfortable, but he purred the while and seemed to enjoy the attention I was giving him. Then he got off and went to look out the window.

This was a very pleasing development. I know he dislikes his insulin injections, and I feared that that would be a barrier between us. The truth is, though, he seems to fear them more than feel them. He recoils when I approach him sometimes, thinking that it is needle-time, yet when I inject him, he doesn’t flinch; I think he may, like many humans, dread the idea of needles more than the needles themselves. I believe in any case that his action last night demonstrates that he doesn’t hold my actions against me.

Even in the worst of times, there can often be found reasons to smile. Last night, mine was Neville. 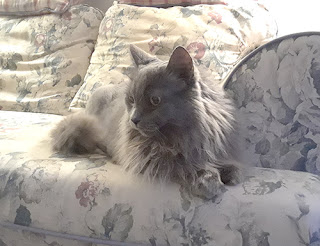